University symbols are an integral part of the identity, which shapes the awareness and unity of our academic community. The current insignia of the Ivan Franko National University of Lviv (large emblem, emblem and banner) were designed by the historian, specialist in auxiliary historical disciplines, Andriy Hrechylo, and approved by the Academic Council in March, 1999. Eight years later, in 2007, the insignia of all the faculties and colleges were drafted.

The emblem of Lviv University depicts a lion on the blue background (the lion is the symbol of Western Ukraine), indicating the regional importance of the University as an educational and scientific institution. In the right paw, the lion holds a three-light candelabrum, which was the symbol of education and science on the seal of the Secret Ukrainian University, existing in Lviv, in 1921-1925. The emblem is part of decorative shield, also containing the Ukrainian Trident and the inscription “1661” – the year of the University’s foundation. The motto of the University on the emblem and on the facade of the main building reads «Patriae decori civibus educandis» («Educated citizens are the glory of the Homeland”). 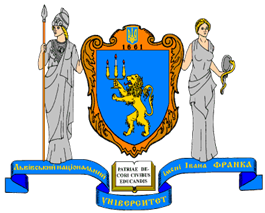 The large emblem of the University depicts a shield with two female figures: Athena as an allegory of science and wisdom on the right and an allegory of vigilance (the woman with a mirror which the snake looks in) on the left. Under the shield, there is an open book with the motto «Patriae decori civibus educandis».

In the university there are also the emblems of 19 faculties and three colleges that reflect the scientific orientation of each faculty and their connection to the Alma Mater.

0 0
Documents of the University