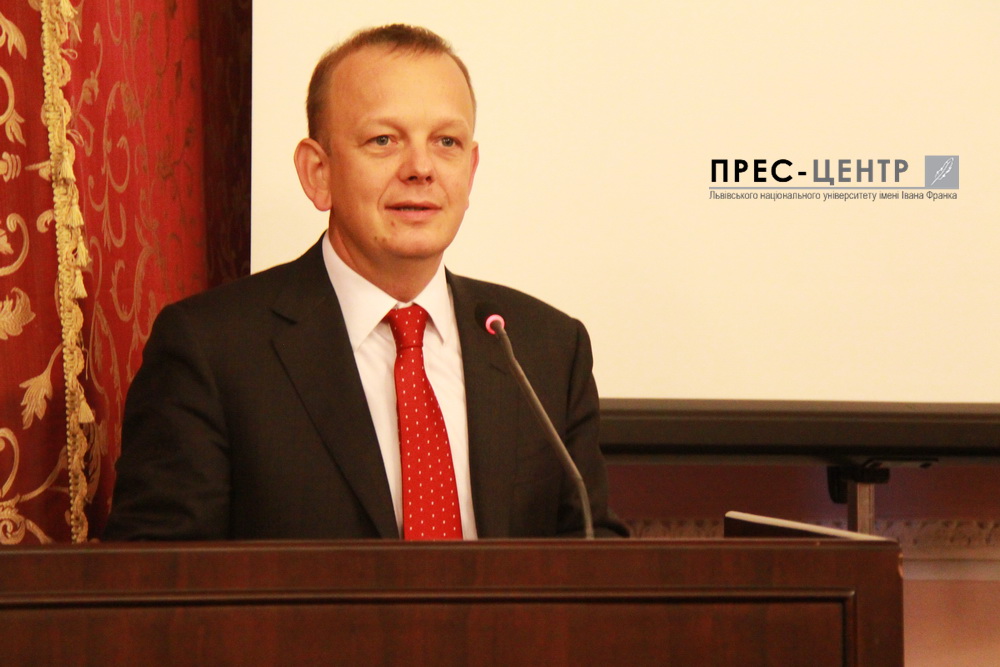 On 4 October 2016, Ambassador Extraordinary and Plenipotentiary of the Republic of Estonia to Ukraine Gert Antsu met with the students and teaching staff of the Faculty of International Relations of Lviv University. The meeting was held as part of the first official visit of the Ambassador to Lviv at the beginning of his diplomatic mission to Ukraine.

Gert Antsu briefly told the students about himself, his studies of political science at the University of Tartu (Estonia), his work in the Secretariat of EU Integration Department and in the State Chancellery as the Director for EU Affairs, as well as his diplomatic mission to Belgium, Switzerland and Luxembourg.

“It is important to note that diplomatic experience in Brussels is like an operating theatre for a surgeon, it is the place where one can get real job skills, develop competence and increase professional level,” said Gert Antsu.

During the meeting, the Ambassador Extraordinary and Plenipotentiary drew attention of the audience to the formation and development of the Republic of Estonia after its withdrawal from the Soviet Union in 1991 and Estonia’s position in today’s geopolitical space.

“The first task the then Estonian society faced was to regain their independence, then to occupy a worthy place among European countries and above all to get rid of sovietism,” emphasized the Ambassador.

“The Soviet Union “killed” any initiative of people and their aspiration to changes. As a result, when Estonia gained its independence all who wanted to preserve it were unwilling to start changing first and foremost themselves. Obviously, the initial processes taking place in the country were unusual and rather painful to them. But then Estonia began to develop rapidly, i.e. a dramatic upturn in economy came, the reforms were implemented successfully, all social processes were established etc. It should be noted that the concept of corruption in Estonia in the early 1990s as well as today is the exception rather than the rule,” pointed out the Ambassador.

Reflecting on the role and place of the Republic of Estonia in the modern world, particularly in Europe, the diplomat noted that Estonia today is a successful European country committed to its own development and national security, and thus to the development of the European Union. “Estonia is the first country where Internet banking and e-government operate successfully. One can carry out any transaction via the Internet from paying utility bills to electronic voting and marriage online. In addition, Estonia is a successful manufacturer of food products. Today we  have reached the appropriate level of a country with a 25-year history of independence. However, we need to strive for further improvement,” claimed Estonia’s Ambassador to Ukraine.

According to the Estonian diplomat, it is very difficult to build and develop a country sharing its independence with others. “Today Ukraine should focus on reforming the judicial, political, energy sectors and other fields, as well as bitterly fight corruption. I am sure that you have a lot of talented technocrats who are able to build a strong and prosperous country. The struggle continues for all of us,” stated Gert Antsu.

23rd International Conference of the Association of Ukrainian Germanists “The German Language: Traditions and Prospects”
The Rector of Lviv University Volodymyr Melnyk and the newly appointed Ambassador Extraordinary and Plenipotentiary of the Republic of Estonia Gert Antsu intend to deepen Ukrainian-Estonian academic cooperation