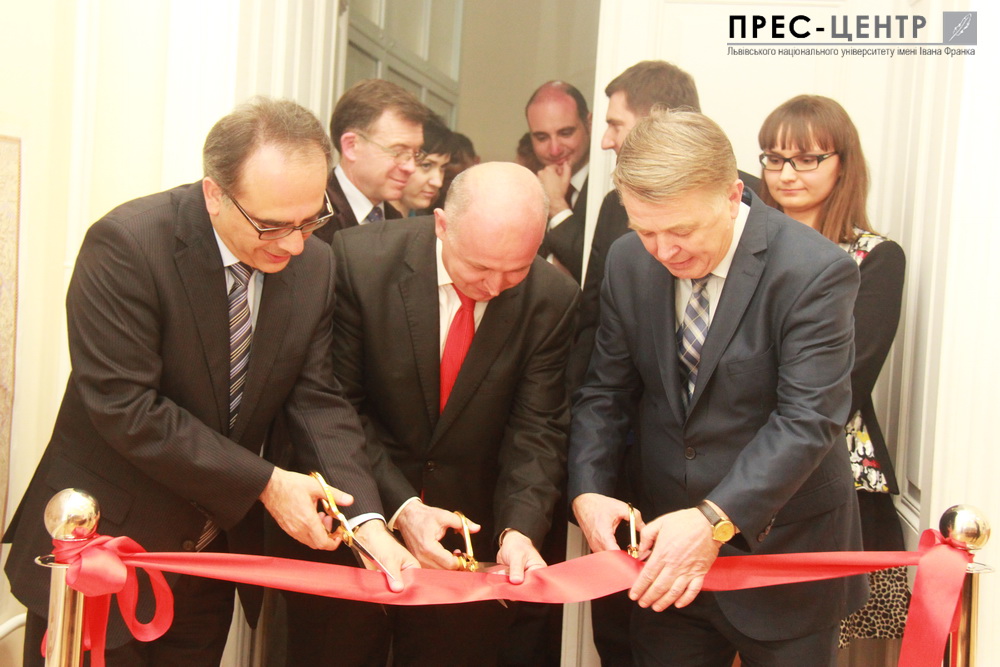 On 20 May 2016, with the participation of Rector, Prof. Volodymyr Melnyk, Ambassador Extraordinary and Plenipotentiary of Turkey to Ukraine Yönet Can Tezel and the Program Coordinator of TIKA in Ukraine Haci Bayram Bolat held the opening ceremony of the Centre of Turkish Language and Literature at Ivan Franko National University of Lviv.

In 2014, Yaroslav Dashkevych Department of Oriental Studies announced a new specialty “Turkish Language and Literature”, which immediately attracted the students’ attention. Every year the number of students willing to study Turkish increases. Therefore, in order to create favourable conditions for studying oriental languages at University, namely Turkish, IFNUL conducted major repairs and furnishing of premises assigned to the Department of Oriental Studies. These premises were equipped with state-of-the art multimedia equipment.

These large-scale works were carried out in the framework of international technical assistance project with the financial support of Turkish International Cooperation and Coordination Agency (TIKA) under the Council of Ministers of the Republic of Turkey.

During the inauguration of the Centre, the Program Coordinator of TIKA in Ukraine Haci Bayram Bolat expressed his hope that such facilities and resources would facilitate the training of students and help to raise a new generation of youth that would deepen cultural relations between Ukraine and Turkey and actively participate in the preservation and study of common cultural heritage, especially in Western Ukraine.

IFNUL Rector, Prof. Volodymyr Melnyk  thanked the Turkish colleagues for active support and interest in developing cooperation. “Our cooperation has been successfully developing and we already have certain results”, said Volodymyr Petrovych and expressed his hope that the cooperation with the Embassy of Turkey and Turkish academic institutions would continue.

Ambassador Extraordinary and Plenipotentiary of Turkey to Ukraine Yönet Can Tezel said that Lviv University takes an active part in joint Ukrainian-Turkish activities. One example is a joint conference to commemorate the 100th anniversary of Turkish troops’ participation in the fighting in Halychyna in 1916-1917, which took place on 19 May 2016 in Lviv.

“I am very glad that your cooperation with Turkish universities, namely Sakarya University, continues. I am sure that together we will implement a lot of interesting projects”, said the Ambassador, adding that Turkish and Ukrainian students actively communicate through social media and even organize different events together.

The dean of the Faculty of Philology Sviatoslav Pylypchuk expressed his gratitude to the Turkish colleagues for financial support and logistical assistance in developing the infrastructure of Yaroslav Dashkevych Department of Oriental Studies.

Sviatoslav Mykhaylovych said that it was a significant event for the University in the year of commemorating Ivan Franko anniversary. “Ivan Franko was always open to the world and he always wanted to represent Ukraine in the world and study the culture of other countries. Describing the relationship between the states, he said that he always directed his efforts to build “golden bridges of understanding and sympathy between the nations.” We believe that today’s event is one of the important elements for building “the golden bridge of understanding” between Ukraine and Turkey, which we are building across the Black Sea, which does not separate, but unites us,” said the dean of the Faculty of Philology.

Note: Turkish Cooperation and Coordination Agency (TIKA) is a public entity which is subject to the Council of Ministers of the Republic of Turkey and is responsible for coordinating and providing technical assistance on behalf of the Republic of Turkey to the partners. Through 52 offices TIKA implements development projects and activities, working with more than 140 countries. In Ukraine, TIKA has been working since 1997, and in 2013, the central TIKA Program Coordination Office was opened in Kyiv to coordinate projects.