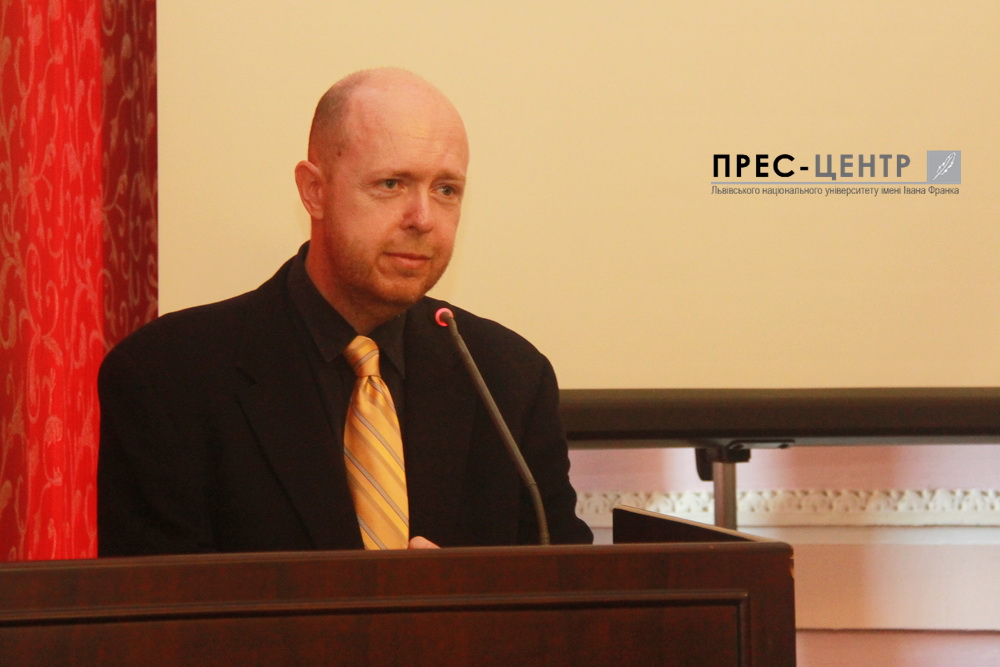 “The fact that a Czech will tell the Ukrainians about the history of their state may resemble taking coal to Newcastle. However, I want to suggest a new comparative view of this issue”, started an open lecture for the students and teachers of Ivan Franko National University of Lviv a famous Czech historian, literary critic, cultural studies and literary scholar, professor of Charles University in Prague Martin Putna on “The history of Ukraine through the eyes of Europe”.

During the lecture, Martin Putna spoke about the preconditions of his scientific research into the history of Eastern Europe. “It’s no secret that Ukraine has greatly interested Europe as a result of the events on Maidan Nezalezhnosti (Independence Square) in Kyiv in 2013-2014. At the same time, in the Czech Republic, Russia has been trying to say that Ukraine does not exist. It is Little Russia. So I decided to fight against these things and started an independent research of Ukraine as a possible key area in the research and understanding of contemporary political reality.”

Martin Putna outlined the perception of Ukraine and its history in Europe. According to the professor, for Europeans Ukrainian history is fragmentary and only begins with the XVII century. In addition, there is a confusion of the notions of “Rus” and “Russia”. “It is because we live in the time of globalization and at the same time awakening of patriotism, and therefore it is difficult to perceive the history of a certain nation as something separate and independent”, said the professor.

During the lecture, Martin Putna said that in terms of Europe the history of Ukraine is something not understandable as is the history of other European countries. According to the Czech researcher, in Europe they still believe that Kyivan Rus is the beginning of Russian history. “Nowadays, the information that Kyivan Rus is the beginning of Ukrainian history is surprising for a number of modern politicians and journalists,” said the scholar.

At the meeting with the students and teaching staff of Lviv University, Martin Putna expressed his theory that the term “Rus” should be used in the plural in the context of various state formations in Eastern Europe. After briefly describing them, the researcher said that in the past there were Western and Eastern Rus, i.e. Lithuanian and Moscow Rus.

“In both cases, these two “Ruses” were subordinate, but still they developed. Lithuanian Rus was the precondition for establishing Rzeczpospolita, it developed according to Western conception, while Moscow Rus was incomprehensible to other countries, because on its territory an idea of otherness, uniqueness and selectness began to form, the belief that the Western world was bad, heretical and corrupt”, said Martin Putna.

During the lecture, the professor stressed the importance of XIX century in shaping European countries, describing, in particular, national revival of Ukraine. “In this context it should be mentioned that Ukrainian revival, on the one hand, is a positive phenomenon, since it became a part of common Slavonic revival, on the other hand, it happened in the context of Pan-Slavism”, said Martin Putna.

The Czech scholar suggested that it is important for each country to have its poet who would communicate with the outside world, creating a holistic picture for the perception of a country through the prism of literature. According to Martin Putna, such a poet in Ukraine was not Taras Shevchenko. “A Russian writer of the Ukrainian origin Mykola Hohol spoke about Ukraine in a specific manner. He made it clear to the world that the Ukrainians are religious people, and that religion accompanies their whole life”, believes Martin Putna.

The professor of Charles University said that throughout the history of the Ukrainian state it was often perceived as an episodic phenomenon. “It was spoken about only when Ukrainians wanted to create their own state, or Ukraine was mentioned in the international arena when it caused other sharp turning points in history. Today, this statement is confirmed by three events: the Chornobyl disaster, the Orange Revolution and the Revolution of Dignity. However, none of them, causing a wave of interest, unfortunately, evolved into something bigger”, said Martin Putna.

Therefore, according to the professor, modern Western and Ukrainian intellectuals are responsible for changing fragmentary knowledge about Ukraine and its history into complete, objective and comprehensive one.