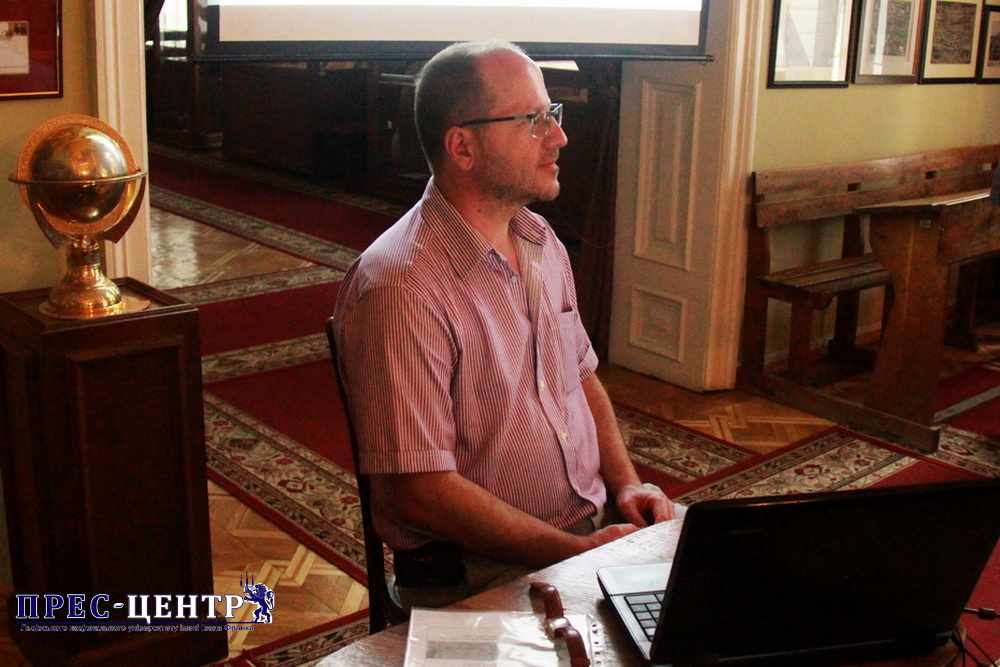 Professor of St Andrews University (Scotland) Tomasz Kamusella delivered a lecture “Central Europe in the Distorting Mirror of Maps, Languages and Concepts” for students and teachers of the Faculty of History of Ivan Franko National University of Lviv on June 7, 2017.

Professor Tomasz Kamusella is a world-renowned researcher of ethno-political issues and nationalism in Central Europe. He is the author and co-author of a number of monographs on the history of the peoples of Central Europe, in particular: “Creating Languages in Central Europe During the Last Millennium” (2015), “The Politics of Language and Nationalism in Modern Central Europe” (2009), “Nationalisms Across the Globe” (2005-2006), “Nationalisms Today” (with Peter Lang, 2009). His new monograph “The Un-Polish Poland, 1989 and the Illusion of Regained Historical Continuity” is due to be published in the summer of 2017, and collective work “The Political and Social History of Southern Africa’s Languages” by the end of that year.

During the lecture, which was also attended by scientists from other institutions in Lviv, changing perceptions about the concept of “Central Europe” in the long historical perspective as well as their projection onto the present were considered. The lecturer demonstrated that in modern times this concept was just “invented” (“imagined”) as the entire European continent and any human idea. Also, according to the Professor, the term “Central Europe” can be considered a specific response to the elimination of empires existing in this region after 1918.

Summing up, the Professor said that only time will tell whether “Central Europe” will be needed by the public. At the same time, it seems, the  term added elevation and hope to people at the Euromaidan during the Ukrainian Revolution Of Dignity at the breach of 2013 and 2014.

The students asked many questions and took part in a lively discussion. Meeting with T. Kamusella promoted closer acquaintance of Ukrainian historians with issues and research methods that are now the focus of world historiography.