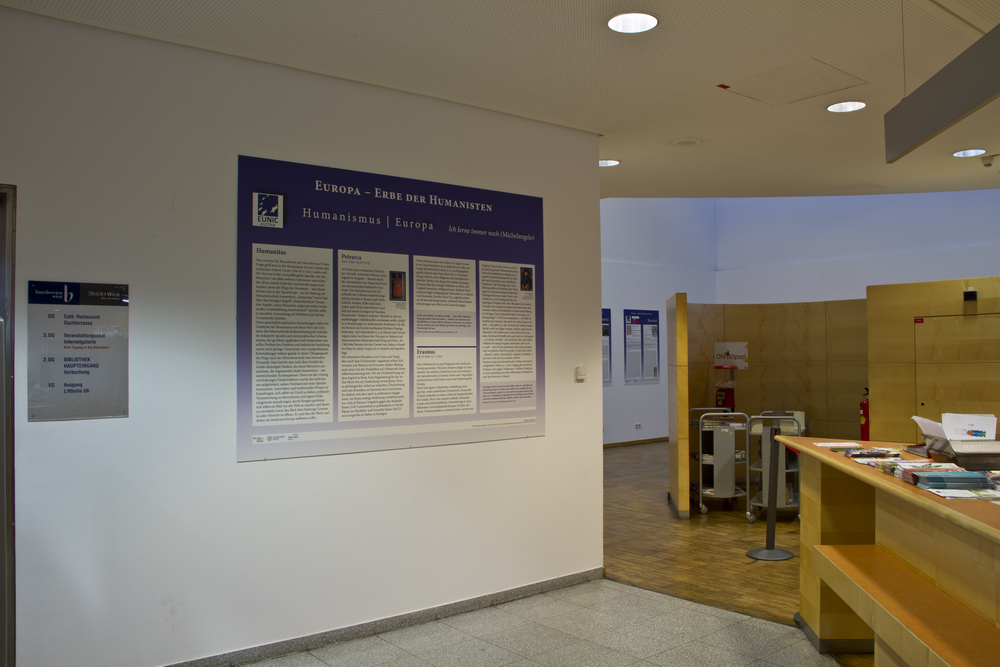 The exhibition “Europe – the heritage of humanists (“Europa – Erbe der Humanisten”) has been lasting for two months in Vienna organized by the Cultural Association EUNIC Austria. 27 countries have become the participants of this project: 23 countries of the European Union and associated members of EUNIC including Ukraine.

By the concept of the organizers each country-participant makes a poster with the information about two personalities of Renaissance humanists (XV-XVIII c.) who made the contribution to the culture of their own nation which was the considerable contribution to the general European culture at the same time. One of these persons had to be the native of the country who had left and acted on the territory of another state, region or community and another person had to be the native of another state or region who had come to the corresponding country and made a contribution to its cultural/literary heritage.

It’s pleasant that the Docent of the Ivan Franko National University of Lviv Myroslav Trofymuk has got the opportunity to make the presentation of Ukraine; he has suggested a number of the names worthy to be presented at the exhibition. Two representatives connected with Ukraine have been selected by the Austrian Academy of Sciences employee Christian Gastgeber and Professor of Vienna University Elizabeth Klecker.

“Our vision of the perspective of developing the society, culture,” future” of Europe turned out to be absolutely in unison”, Myroslav Trofymuk notes.

As a result, the University lecturer has presented the stories of two undeservedly forgotten persons – Ivan Uzhevych and Sebastian Fabian Klenovych.

Ivan Uzhevych was born probably on the territory of modern Ukraine (we don’t have detailed information) and studied at Krakow Academy and later at Paris University. In France he compiled the textbook in the Ukrainian language in Latin (Lingua Ruthena). Two manuscript versions of this textbook were retained – so called Paris and Arar copies.

Sebastian Fabian Klenovych – a poet, a native of Poznan region travelled through Przemysl to Lviv, as people said at that time, to Red Rus in 1570. He was fascinated by the region’s nature, architecture as well as towns’ society but, first of all, by its original culture. The Latin speaking poem “Roxolania Sebastiani Sulmyrcensis Acerni, civis Lubliensis” (it is known as “Roksolania” in the cultural environment of Ukraine) was published in Krakow in 1584. The fact that the poem “Roksolania” was written in Latin made it available for each educated European reader. Therefore, this publication can be considered as a very important means of information about Ukraine especially taking into account the popularity of the author’s person – S.F. Klenovych – in the Rzeczpospolita and European context.

We should note that the grand opening of the exhibition took place at the Main Library of Vienna on April 19, 2017.

The head of Vienna main library Christian Jahl, the ambassador Teresa Indjein, the Austrian Academy of Sciences employee Christian Gastgeber, the President of EUNIC-Austria and Director of the Romanian Institute of Culture Irina Cornisteanu spoke at the ceremony. In particular, they said that the idea of the project appeared on the basis of the processes of developing the European commonwealth (European Union) and it was developed in the cooperation of EUNIC-Austria with Vienna University, Austrian Academy of Sciences and Vienna libraries.

The organizers note that the accent of the exhibition is the distinct connection with modern Europe, first of all, with the ideals of the European commonwealth. Those value categories, that are matters of course for us, have become the result of the centenarian strengthening of the ideals by the humanists.

“This exhibition must encourage us to rethink the traversed path. The themes which were actual in the past epochs – the epochs of humanists – such as: migration, international cooperation, relations, tolerance and equality should be discussed during these events”, – the organizers emphasize.