Home
News
Ex-Energy Minister of Lithuania: “The main problem of Ukraine is stealing money and resources” 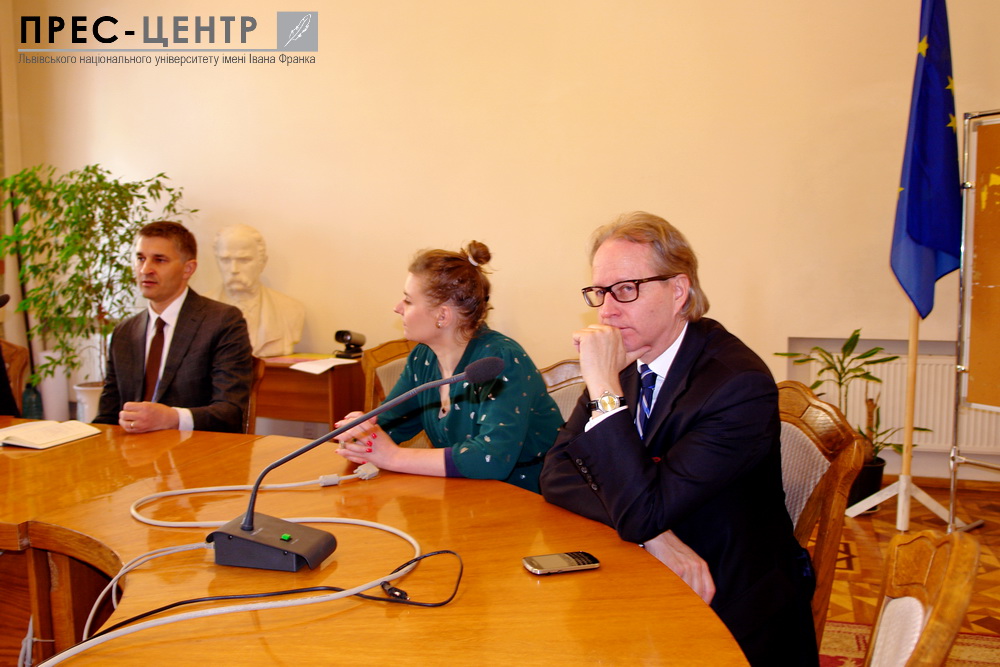 During his visit to Lviv ex-energy minister of Lithuania (2012-2014) Jaroslav Neverovych met with students of the Faculty of International Relations of Lviv University on May 17, 2016. The theme of the meeting was “Energy Security. Experience of Lithuania”.

Introducing the guest, the Dean of the Faculty of International Relations, Prof. Markiyan Malskyy said that it is now urgently important to discuss issues of energy security, in particular to adopt the successful experience of Lithuania in this field.

During the dialogue with students Jaroslav Neverovych noted that Lithuanians are always happy to share their ideas with Ukrainian colleagues, as well as views and best practices in every sphere, including in the energy sector, as the peoples of two countries share a common history.

Therefore, according to the Lithuanian expert, today energy security in Lithuania is a priority. Outlining the basic steps of energy independence of Lithuania, Jaroslav Neverovych said: “At that time we took unpopular steps. Contrary to Ukraine we did not have our own natural resources. Lithuania entirely depended on imports of energy resources. So, considering everything, we decided to seek support from neighboring countries, adjust to their legislation to create a transmission system in the energy sector”.

Former Energy Minister stressed that Lithuania managed to ensure energy independence from Russia. “To enhance the security of supply, increase competition and stability in the energy sector official Vilnius implemented a number of strategic projects: integration into power systems of Poland and Sweden; association of pipeline with Poland; agreements between the gas companies of Lithuania and Norway and the construction of a terminal for receiving liquefied gas in the Norwegian city of Klaipeda. Thus, we managed to reduce our dependence on Russian resources. “By the way, “Gazprom” lost 60% of the market in Lithuania”, he said.

During the meeting, Jaroslaw Neverovych in detail told the students about the construction of LNG-terminals in Lithuania, designed for liquefaction and shipment of liquefied natural gas. According to the minister, these facilities are extremely costly in construction, however, then they become self-supporting.

“In comparison with Lithuania Ukraine is a rich country. We have neither such natural resources nor your opportunities. It is obvious that the main problem of Ukraine is outright stealing of public money and resources. So the first thing to do is to stop corruption and to begin reforming the country at the same time establishing relationships with investors. In addition, an integral part of this process is to ensure transparency, openness and reliability of all state institutions. “By the way, it took 25 years to ensure our energy independence” said the former energy minister of Lithuania.

It is worth mentioning that Jaroslav Neverovych is Lithuanian economist, diplomat and politician of Polish origin. He is a graduate of the Warsaw School of Economics in the field of international economic and political relations. Having considerable diplomatic experience, Jaroslav Neverovych was appointed Ceneral Manager of LitPolLink in 2008, the company aiming at creating a so-called energy bridge connecting Lithuania and Poland. In 2012-2014 he served as Minister of Energy of the Republic of Lithuania. Jaroslav Neverovych is the first Pole, who was a Minister in the Lithuanian Ministry. Since 2015 he has been the president of the Polish-Lithuanian Chamber of Commerce.