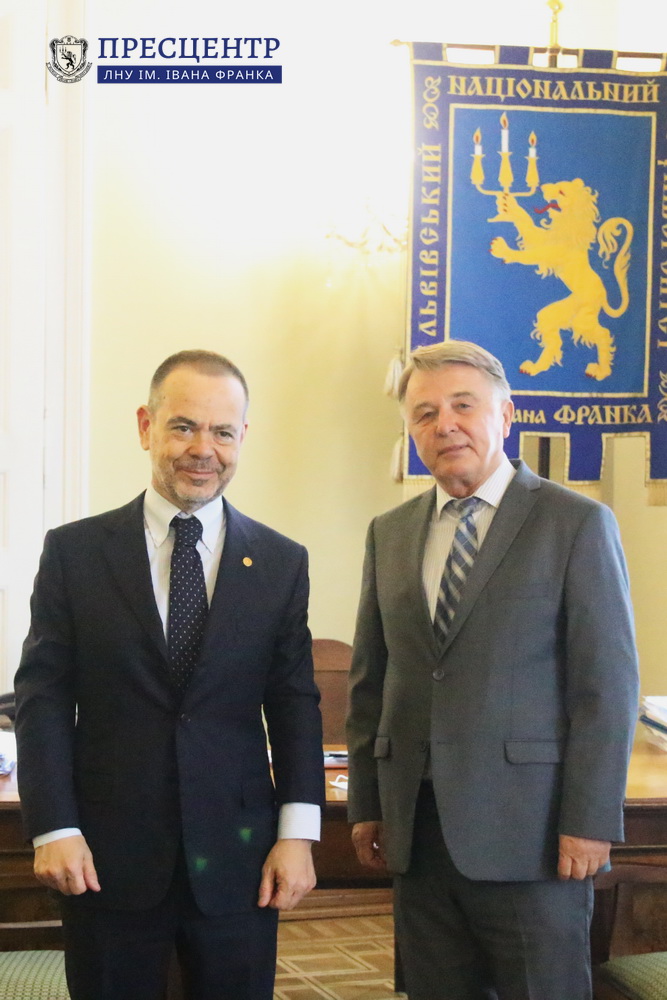 On September, 21, 2020 the Extraordinary and Plenipotentiary Ambassador of Italy to Ukraine Davida La Cecilia and the head of the Italian Cultural Institute in Kyiv, Eduardo Crisafulli made a working visit to the university. Professor Volodymyr Melnyk, the chancellor of the university and professor Roman Hladyshevskyi the vice-chancellor of the research work greeted the guests.

The chancellor expressed his gratitude to the Ambassador of Italy for his support in the involvement of the University in the international project. As a result of this project the Ivan Franko National University of Lviv was provided with the native speaking teacher from Italy, whose salary was completely financially covered by the Italian party.

The ambassador of Italy Davida La Cecilia introduced Eduardo Crisafulli, a recently appointed head of the Italian Cultural Institute in Kyiv and expressed his hopes that the fruitful cooperation of the Embassy of Italy in Ukraine with the University in the field of the Italian language and culture would continue henceforward. The expected result of such interaction has to be the introduction of Italian as a separate speciality in the academic curriculum of the university, mentioned Davida La Cecilia.

Volodymyr Melnyk, the chancellor of the university indicated that the issue was rather complicated, however, the university had some experience of teaching various foreign languages. In particular, the Ivan Franko National University of Lviv is the only Ukrainian higher educational establishment where Slavonic languages are taught.

Davida La Cecilia also took a genuine interest in the university experience of teaching Slavonic languages and highlighted that it could be one of the directions in collaboration with Italian universities.

Davida La Cecilia and Eduardo Crisafulli also visited the Centre of Italian language and culture at the University within their visit, where they met with the students from the faculty of International Relations who learn Italian and discussed the next steps in collaboration with the head of the Centre Olena Horiachuk, namely: the opportunities of internship and upgrading courses for the teachers of Italian, students’ exchange, creation of the digital library, etc.

At the end of the visit to the Ivan Franko National University of Lviv Davida La Cecilia and Eduardo Crisafulli visited the historical museum at the university. The guest also paid a visit to the Scientific Library, where accompanied by Vasyl Kmit the head of the library archive they visited the old print department and the archive of the oldest library in Ukraine.

The General Meeting of the First-Year Ph.D. Students
Extraordinary and Plenipotentiary Ambassador of Italy to Ukraine Davida La Cecilia visited the University