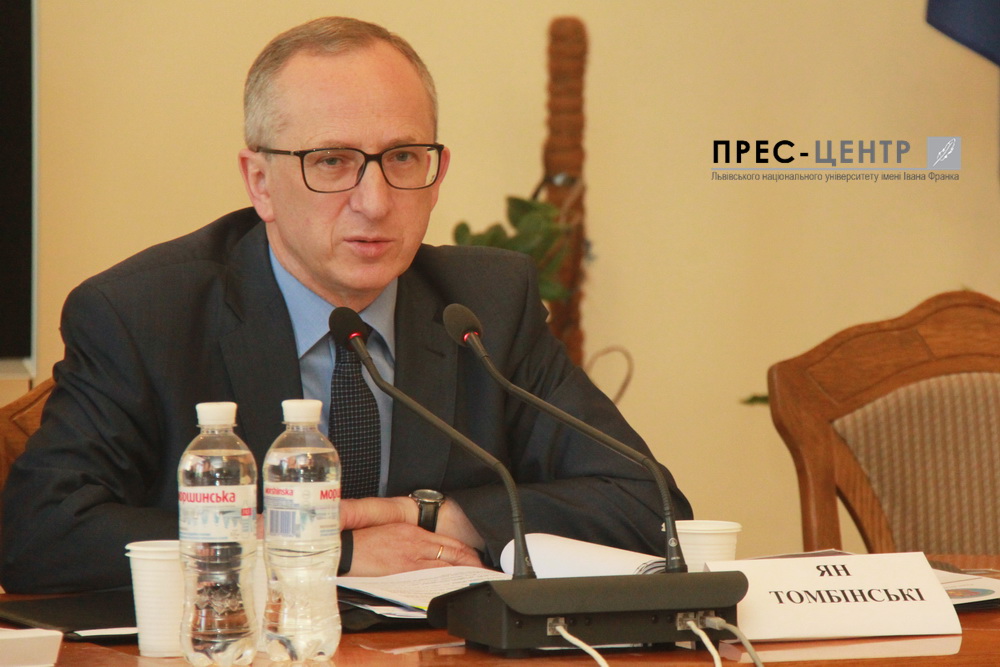 The Head of the EU Delegation to Ukraine, the Polish diplomat Jan Tombiński met with students and professors of the Faculty of International Relations of Lviv University during a working visit to Lviv on May 27, 2016. The meeting was also attended by the Head of Lviv Regional State Administration Oleg Synyutka and the Extraordinary and Plenipotentiary Ambassador, Dean of the Faculty of International Relations Markiyan Malskyy.

Presenting the guest, Markiyan Malskyy said: “Today we have a unique opportunity to talk with the best diplomat of the European Union Jan Tombiński, who has been working in Ukraine has four years. This is a man who has great diplomatic experience and is a sample of diplomatic model in the world. It should also be noted that all the successes of our country towards European integration are associated with clear position, support and the efforts of Jan Tombiński”.

The Dean also pointed out the significant contribution of the European diplomat to the reforms in Ukraine, as well as a good tradition of cooperation between Jan Tombiński and Lviv University, in particular, the Faculty of International Relations.

“My task is to share positive experiences of Poland, work out the mechanisms of European integration, improvement of life and find answers to all the questions that faced Ukraine in 25 years of independence. In addition, it is extremely important for Ukrainian colleagues to realise the opportunity of not only practical, but also strategic work”, said Jan Tombiński at the beginning.

During the meeting the European diplomat outlined the main principles, which, in his opinion, are the key to ensuring appropriate conditions necessary to reform the country.

Jan Tombiński is sure that “the first premise of the early reformation processes is publicity. Changes will not be long-lasting and effective if Ukrainians do not understand their essence. So, today it is important to launch dialogue with the society, realizing that any help outside is effective only in case of the tireless work. People should be told that the reforms spelled out in the Association Agreement have positive effects on the country and its citizens, and that the European Union supports this trend”.

Talking about his diplomatic experience in Ukraine under President Viktor Yanukovych, Jan Tombiński recalled the events of November-December 2013, which preceded the Revolution of Dignity. On september 18, 2013, the Head of the EU Delegation attended the meeting of the Government headed by Mykola Azarov, during which the document on Ukraine Association with the European Union was on the agenda.

“… The then Prime Minister Mykola Azarov members presented the document to the Ministers of the Government citing an extract from it. It became clear that he was holding a strategic document of Russian Federation, its modernization path. To reduce the degree of stress, Azarov expressed confidence and no alternative in correct choice of the way in which Ukraine should go”, said the European diplomat.

Jan Tombiński also told the students about a meeting with former President of Ukraine Viktor Yanukovych held before the cancellation of the procedure of signing the Association Agreement in Brussels.

“… Then, Viktor Yanukovych was well aware that this document needs to be signed, because, as evidenced by data from the survey under the President of Ukraine, 70% of the active population of the state supported the European vector of Ukrainian policy. But Viktor Yanukovych did not understand one thing: an imitation policy always ends in disaster. There is a big difference between public words and actions. And people are much smarter than politicians. This is a simple explanation for social and political crisis that happened shortly afterwards”, said Ian Tombiński.

While talking with students and professors, the diplomat also spoke about the possible consequences that may occur in Ukraine after the transformation processes. According to him, the situation will depend on how clear the realization of Ukraine’s future is, which depends largely on the Ukrainians themselves, and whether the process over which diplomats are working will have public support.

Ian Tombiński believes that “another key principle of the reform of Ukraine is the destruction of administrative structures that facilitate corruption. And the third thing to do is to eradicate all that is connected with the corruption that exists on the mental level. The corruption in the pocket is the result of mental corruption. So, you need to get rid of monetary consciousness and put people at the center of attention”.

The Polish diplomat added that the fourth principle, which, as Poland’s experience shows is effective, is the philosophy of political accountability and democracy. “Every day a dialogue with the community needs to be built and consensus found. I have been working in Ukraine in accordance with these principles for four years now”, he said.

During the meeting with students and professors of the Lviv University, the Head of the EU Delegation to Ukraine noted the interesting personal observations on the role and place of Ukrainians in his country.

“When I talk with Ukrainians across the country, I have the same feeling: you follow the principle of Cossack freedom, which you transmitted genetically and historically. However, it is still at such a “Cossack-Haidamak-anarchist” level. This is something like “we are not yet ready to work in the structures, we are free, but only on his piece of land”, said Jan Tombiński.

More than 100 scientists, mathematicians from 12 countries participated in the International Conference on Complex Analysis and Related Matters
Experts in security from 15 countries are discussing the protection of democratic values and human rights in the activities of intelligence services