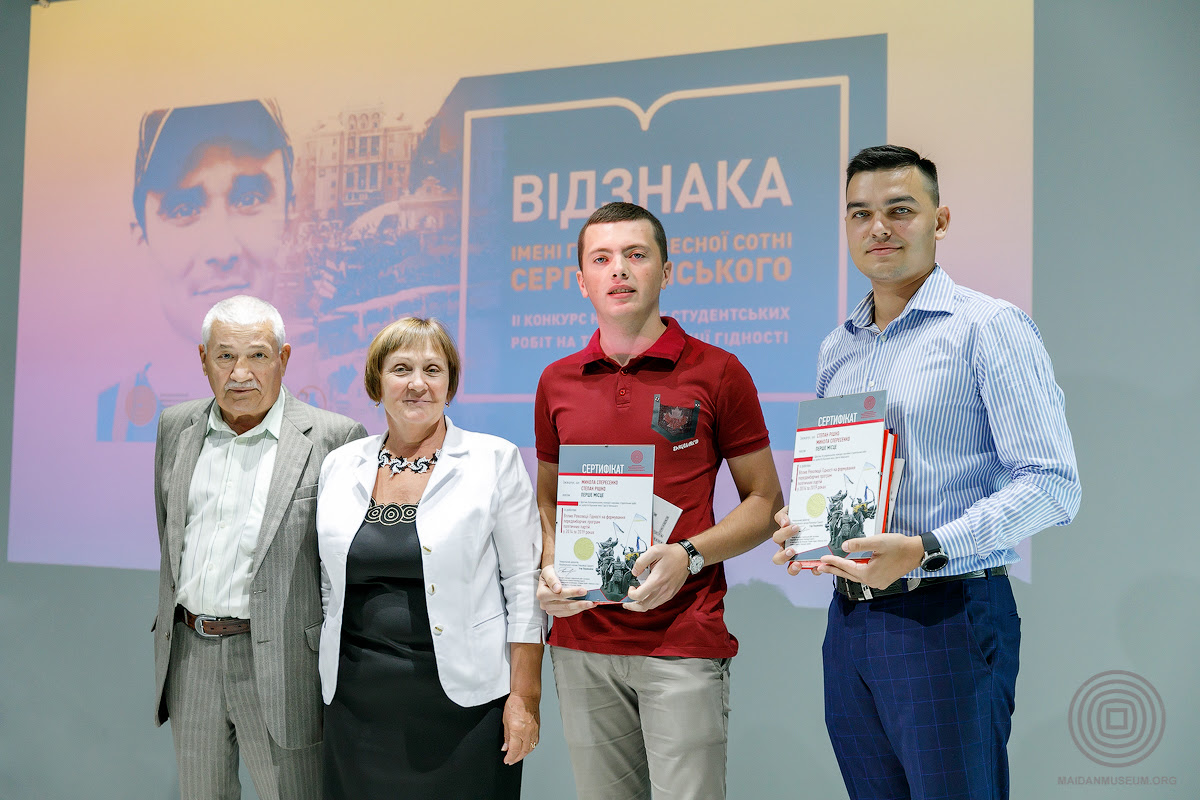 On August 13, 2020, the Maidan Museum information and exhibition center in Kyiv hosted the winners awarding of the II All-Ukrainian competition of scientific student works on the topic “Revolution of Dignity” within the framework of the Serhiy Kemsky’s Award.

The competition was initiated by the Revolution of Dignity National Museum and the non-governmental organization “Heavenly Hundred Heroes Family”. The organizers received 60 applications from 18 cities of Ukraine. In the second round of the intellectual competition, 27 works from 32 participants from 40 universities of the country were selected.

“We were looking for ways to talk about the Maidan with students, schoolchildren, children, but not passively, imposing our vision, but trying to involve them in learning and rethinking this history on their own. That’s how the idea of holding a scientific works competition for students – the Serhiy Kemsky Award – came about,” said Igor Poshivailo, Director General of the National Museum of Revolution of Dignity.

The organizers note that the scientific works of this year’s competition winners represent different views on how the Revolution of Dignity events have transformed in the public consciousness into socio-political, cultural and historical phenomena, influencing the formation of national memory and political processes in the country. It is noteworthy that the finalists’ works can be considered as a significant contribution to the development of humanitarian research about the Maidan, particularly, in political science, social communications, history and philology.

Mykola Speresenko and Stepan Rishko, students of political science at Ivan Franko National University of Lviv, won the intellectual competition. They have prepared a research paper on “The impact of the Revolution of Dignity on the formation of political parties’ election programs in 2014 and 2019.”

In their study the students proposed a model which helps to evaluate the level of democracy and political responsibility of the political powers, and the democracy level of society itself, which chooses a party based on its socio-political requirements.

It is extremely symbolic that Mykola Speresenko and Stepan Rishko are representatives of the Political Science Department at the Faculty of Philosophy in Ivan Franko National University of Lviv, where the Heavenly Hundred Hero-Serhiy Kemsky, previously studied.

“My studies at the University began in the auditorium named after Sergei Kemsky. He, like us, was a political scientist. Our work is unique because it pushes the political parties programs to be more specific and  detailed, and the society should be more meticulous to these programs and should make choices consciously, “said Stepan Rishko.

The Serhiy Kemsky’s Award was presented to the winners by Heavenly Hundred Hero’s parents – Oleksandr Ivanovych and Tamara Gavrylivna. “I am very pleased that the first place is taken by the students of Ivan Franko National University of Lviv, which my son graduated from. It’s even symbolic and touching… “, – said Tamara Kemska during the competition winners announcement.

The organizers note that the third competition will be announced on November 15, the day of Serhiy Kemsky’s birthday. Information about him will be published on the relevant website.

It I necessary to remind that Sergey Kemsky was the political scientist, the journalist, the Euromaidan activist. He was born in the Crimea in the family of a sailor. He received a master’s degree in political science from the Faculty of Philosophy at Ivan Franko National University of Lviv. He was an employee of the Institute of Political and Economic Risks and Prospects, wrote articles for “Ukrayinska Pravda” (Ukrainian Truth)”, the magazine ” Den’” (Day) and others. He stood for the introduction of a direct democracy system, supported the cooperative movement, searched for the most effective mechanisms for mutual assistance in society, control over politicians and the fight against corruption; public activist, participant of the campaign “Against police arbitrariness”. He died from a bullet on Institutska Street at the age of 32.

The Serhiy Kemsky Award is a competition of scientific students’ works on the topic of the Revolution of Dignity, its features, achievements, significance and influence on various spheres of political, social and cultural life. Implemented within the project “Heroes’ Awards”.

According to the National Museum of the Revolution of Dignity