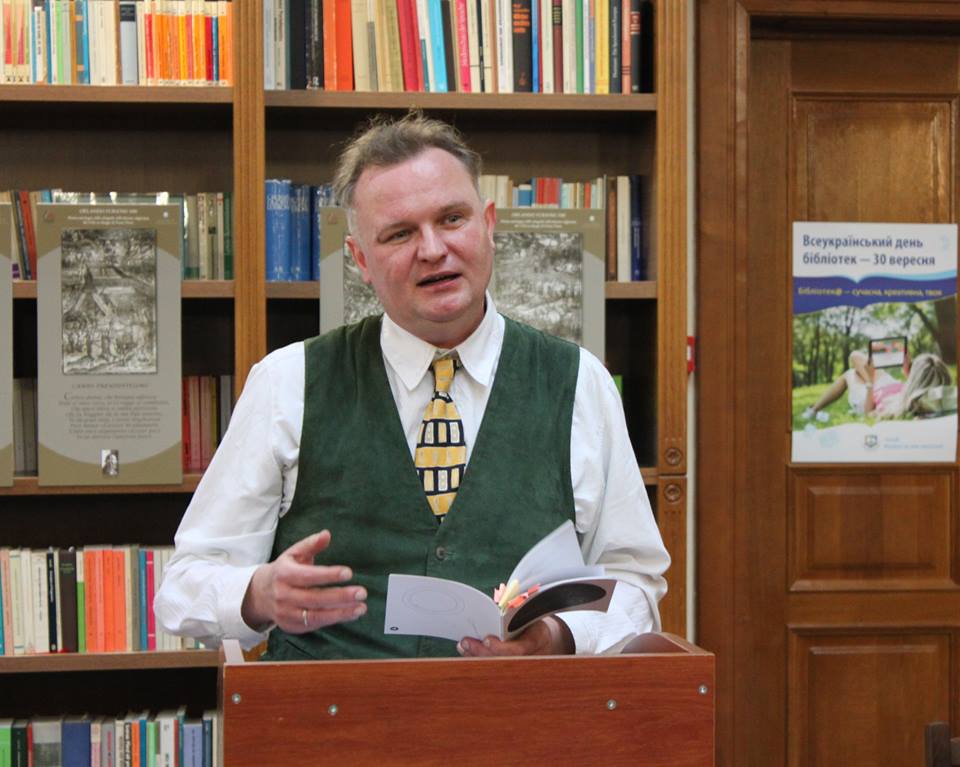 This year the world saw the poetic book by the famous Latvian poet, journalist and translator Knuts Skujenieks “My Little Homeland”, the concept, selection of texts and translation of which was prepared by a Ukrainian poet, translator, literary critic, head of the NGO “Center of Baltic Studies” in Lviv University Yuri Sadlovskyi. Small in volume but of great depth of thought and way of poetic expression the collection was published by the Ministry of Foreign Affairs of the Republic of Latvia, the Embassy of Latvia in Ukraine and the Honorary Consulate of Latvia in Lviv (the translation of the book was also supported by the Latvian Association of Writers and Ministry of Culture of the Republic of Latvia).

The edition was presented at the Scientific Library of the University on December 20, 2016. The meeting was moderated by poet, translator, and scientific secretary of The University Library Hrygoryi Chopyk.

“Knuts Skujenieks is a person who shares our love of freedom; he is close and understandable for Ukrainians because he experienced the same Soviet “repressive school” as our giants of spirit of the 1960s. Harassment, groundless accusations of nationalism, seven years spent in camps in Mordovia did not break writer and taught him to be himself against all odds. Even today, Ukraine has something to learn from the Baltic countries while paving its way towards Europe from bondage (imposed by “elder brother”) to freedom and national identity!” – said Hrygoryi Chopyk starting the presentation. “This book teaches us to listen to great poetry of life, a great silence, a great song” – he added.

Wife of Hrygoryi Sadlovskyi Mariana Ventsek helped feel melodiousness and closeness to Latvian folk “swing-songs” (Dines) of the texts by Knuts Skujenieks whiler performing musical accompaniment a cappella songs “What Sayest Thou Dawn?” (music by Yu. Sayenko), “Fairy Tale” (music by M. Zarichnyi), “Loose Shoes Will Leave the Heart.” Finally, Ukrainian poetic songs to the words of other Latvian poets sounded during the performance, in particular, Aspazija Rainis’ “Christmas Lullaby” (known from the movie “Long Road through Dunes”) performed in a duet by Yu. Sadlovskyi and M. Ventsek.

“Through the prism of Knuts Skujenieks I will open Latvia to you now, my Latvia; I will share my personal experiences of exploring the country, its language and culture …” said Yuri Sadlovskyi.

He also said that using Russian contractors it took him a long time to come to understanding (like for most people of the Soviet space), and only later he realized: Ukrainian must communicate with Latvians directly and build relationships alive, without mediation. It is exactly what a great friend of Ukrainian literature Knuts Skujenieks did spending the time in the camps to communicate with the Ukrainian intelligentsia (who were also imprisoned for “nationalism”). It is no coincidence that the first book by Latvian poet was published after his return from exile. It was a collection of translations of Lesya Ukrainka’s “Sister of Thunder Lightning”. Subsequently, the translator prepared a number of poetry books by other authors opening Ukraine to the Latvian reader.

“The main rule for an interpreter is not to translate literally, but open borders that do not let us to another culture! Fell a foreign culture, learn this different world and only then you can start to do the translation”, emphasized Yuri Sadlovskyi.

Writer, translator, scholar of antiquity, professor of the University Andriy Sodomora thanked Yuri Sadlovskyi for good presentation in the library, drawing parallels between the image of “small homeland” of Knuts Skujenieks and famous words: “We Love the Motherland not because It is Large, but because It is Ours”. A famous mathematician, professor of Lviv University Mykhaylo Zarichnyi stressed on the elitism of reader community that enjoys the poetic word and pointed out continuous musicality of poetry of Knuts Skujenieks, which is successfully rendered in the Ukrainian translation.

Besides the librarians, teachers and students of College, Faculty of Philology, the students of the National Academy of the Army named after Hetman Sahaidachnyi came to admire the beauty of Latvian poetry in translation. In particular, an interesting piece in the presentation was the poetic “dialogue” between Yu Sadlovskyi and students, one of whom read own text on the tragic events of today.

To paraphrase the words of one of the poems by Knuts Skujenieks that “the way to Athens is far and yet the news must be brought,” Hrygoryi Chopyk concluded that Yuri Sadlovskyi still told the audience the message of Latvia at the presentation in the library of the University.