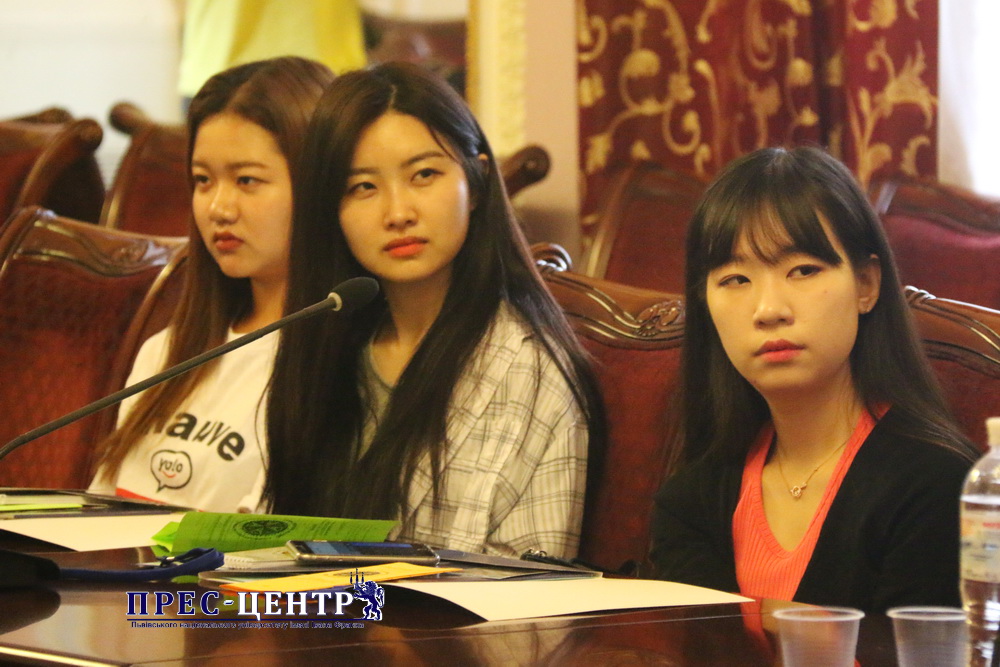 The Traditional International Summer School of Ukrainian Language and Country Studies opened on July 17, 2018, at the Ivan Franko Lviv National University. 30 participants from 11 countries – the Republic of Korea, Germany, Austria, Croatia, the USA, Canada, France, Sweden, Turkey, Russia, and Georgia – will study the Ukrainian language during three weeks to become more familiar with the history and culture of Ukraine. This year’s Summer School is conducted by Lviv University in partnership with Hankuk University of Foreign studies (Republic of Korea), the Humboldt University of Berlin (Germany) and the University of Zagreb (Croatia).

The solemn opening of the Summer School took place in the Mirror Hall of the University. Participants were greeted by the Rector of the Ivan Franko University, Corresponding Member of the National Academy of Sciences of Ukraine, Professor Volodymyr Melnyk, Vice-Rector for Scientific and Pedagogical Work, Professor Yaroslav Harasym, Dean of the Faculty of Philology Sviatoslav Pylypchuk and Associate Professor Iryna Zbyr. Lesia Antoniv Senior Lecturer of the Department of Ukrainian Applied Linguistics was the coordinator of the School and moderated its work.

“International Summer School is a special phenomenon in the life of the University because the experience of the previous schools has shown that our sincere friends who come to us, later become the ambassadors of Ukraine in the world. Your visit takes place at the time when Ukraine faces Russian aggression and I appreciate your arrival to the University as an expression of moral support for Ukraine. Besides the fact that you will gain some knowledge of the history of Ukraine, the Ukrainian language, it is also very important for us you receive true information through live communication about what is happening in Eastern Ukraine: that this is not a civil war, it is not a confrontation with parts of the whole – this is Russia’s aggression against Ukraine “, – said Volodymyr Melnyk.

This year’s School, like many years in a row, is organized by the Center for Ukrainian Studies, which is permanently managed by the Vice-Rector on Scientific and Pedagogical Work of Lviv University, Professor Yaroslav Harasym. In his opening address, Yaroslav Harasym continued the topic of a difficult international situation, recalling that it was July 17, 2014, when the Russian-occupying forces in the Donbass region shot down the aircraft of the Malaysia Airlines, which performed the MN17 flight and 298 people died. Participants of the Summer School honored the memory of innocent victims with a moment of silence.

Thanking the participants of the School for choosing the University of Lviv to expand their outlook, Yaroslav Harasym intrigued the prospects of a real cultural upheaval as a result of a deeper knowledge of Ukraine.

“You will have an opportunity to make sure that despite the extraordinary sensuality, expressiveness, good expressive, lexical and other means, the Ukrainian language is also the language of the great people. You will see that the Ukrainians are not an unexpected European nation, which appeared at the end of the twentieth century, but a nation with at least one thousand years of history. After all, just one thousand years ago Yaroslav the Wise became the ruler of the ancient medieval Ukrainian state, entering history as one of the most famous European rulers of the time, – said Yaroslav Harasym. – I do not know what was the impulse to each of you to choose exactly our school, but I sincerely hope that after its completion it will be necessary – to visit Lviv and to continue to get acquainted with Ukrainian culture. And even if you have not had the opportunity to learn Ukrainian before, the recent events of the World Cup will remind two words you know exactly – it’s “Glory to Ukraine!”.

The experience of the previous twelve Summer Schools proved that each of us is open to you. And the fact that this year’s Summer School at the University has gathered even more participants, as compared to last years, is a proof that you are also open to Ukraine. I am glad that each time more chairs in the Mirror Hall are occupied by the school participants, and I hope that in a few years we will have such a meeting already in the Assembly Hall, where there are 350 seats “, – summed up Sviatoslav Pylypchuk.

A feature of the International Summer School on Ukrainian Language and Country Studies over the past few years is the participation of a large group of students from Korea. We are grateful for the popularity of Lviv in this country for teachers of the Ukrainian language from the Ivan Franko University, who work at the Hankuk University, in particular, associate professor Iryna Zbyr. “For the first time, I have no opportunity to be at the opening of the Summer School,” Iryna Zbyr addressed to the participants. – This event coincides with my holidays, and it is a good opportunity to visit Lviv University – my alma mater. I am glad that my work at the Hankuk Foreign Studies University is not in vain, because every year the number of Korean students at Lviv University is growing. “

In the future, the coordinator of the School, Senior Lecturer of the Department of Ukrainian Applied Linguistics Lesia Antoniv, introduced the teachers of the Summer School to a group of teachers who will organize educational and recreational processes as well as volunteer students who will help our guests to learn Lviv and Ukraine within the next three weeks. The ceremonial meeting finished with the music greetings from the fourth year student of the Faculty of Philology Lidia Bazyliak, who performed two wonderful songs on the theme of the famous Ukrainian songs “Chervona Ruta” and “Hutsulka Ksenia”.