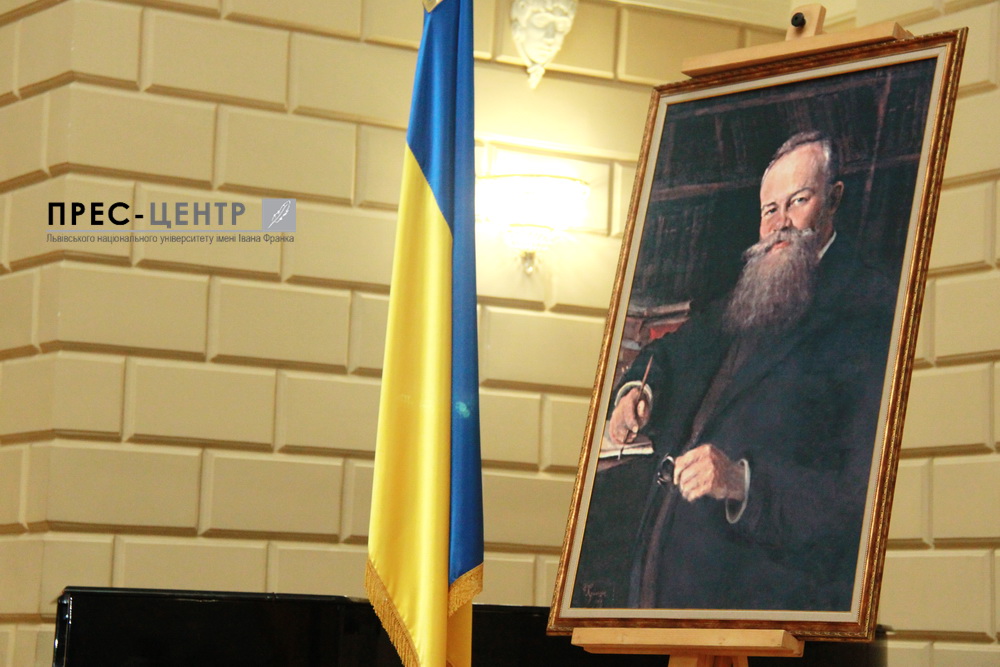 On October 25, 2016 over 100 scientists from Ukraine, Lithuania and Poland gathered at Ivan Franko National University of Lviv to present their works in the sphere of Hrushevsky studies and discuss actual problems connected with the research of different aspects of the activity of Mykhailo Hrushevsky and profound understanding of his historiographic heritage.

Summing up, Volodymyr Melnyk emphasized: “The activity of Mykhailo Hrushevsky became the significant phenomenon of the contemporary, cultural, intellectual and political component of Ukraine as he worked simultaneously in all spheres of the public life. The school of historians and politicians created by him played a key role in the processes of new Ukrainian nation and state formation at the beginning of the XX century. Being a historian by vocation, a scientist Mykhailo Hrushevsky, in fact, became the founder of the Ukrainian state of the contemporary time”, – the Rector noted.

Mykhailo Hrushevsky – the President of the Shevchenko Scientific Society, the Ukrainian scientific society, the head of the historical section of the Ukrainian Academy of Sciences, the chairperson of the university and academic departments, the founder of Lviv and Kyiv scientific schools forming the epoch in the national historiography.

The Director of the Ivan Krypiakevych Institute of Ukrainian Studies of the National Academy of Sciences of Ukraine Mykola Lytvyn noted that Mykhailo Hrushevsky has been and he remains to be one of the most significant intellectuals of contemporary Ukraine.

The feat of that time and the state and political rank of the Professor of Lviv university still obsesses the enemies and opponents of Ukraine. They can’t forgive Mykhailo Hrushevsky the fact that he destroyed the Russian official and historical doctrine of that time and realized the Ukrainian concept”, Mykola Lytvyn noted.

According to the Director of the Mykhailo Hrushevsky State Memorial Museum in Lviv Mariia Mahun, “Lviv can be proud of the fact that it has “History” of Mykhailo Hrushevsky in its annals – the history of his life and activity. “It is difficult to comprehend that scientific heritage Mykhailo Hrushevsky left us “as a historian who is incredibly rich in ideas and theories, as a scientist and public figure, as a person who presented us a passport in the world history”, – Mariia Mahun believes.

The plenary speech of the Professor Oleksii Sukhyi, the Chairperson of the department of contemporary history of Ukraine named after M.Hrushevsky was about the activity of Mykhailo Hrushevsky as the Professor of Lviv university.

“Monumental research achievements of Mykhailo Hrushevsky in the form of “History of Ukraine-Rus”, “History of Ukrainian literature”, hundreds of further publications became the durable foundation to understand the history of Ukraine as the history of the Ukrainian society in pre-national and national phases”, a famous historian, a representative of Mykhailo Hrushevsky’s school, the professor of Ivan Franko National University of Lviv Yaroslav Dashkevych estimated scientific achievements of the scientist. According to him, “Mykhailo Hrushevsky is a gigantic figure in the Ukrainian historical science, hi is unique and original. He was a complicated and exceptional personality. He was not a one-colored person, he had highlights and shadows. His great creative power is, first of all, enormous efficiency and devotion to the science.”

The chairperson of the source studies department of New history of Ukraine of the M.S.Hrushevsky Institute of the Ukrainian Archeography and Source studies of the National Academy of Sciences of Ukraine the Professor Ihor Hyrych and the Professor of the department of Ancient History and special historical disciplines of Ivan Franko State Pedagogical University of Drohobych Vitalii Telvak gave plenary speeches.

We can add that International scientific conference “Mykhailo Hrushevsky: scientist, politician, public figure” will last till October 26, 2016 and work in the format of section meetings.

For the first time Ukraine welcomes the members of one of the largest international congresses of mathematicians, held at Lviv University
The team of the faculty of applied mathematics and informatics of Lviv university – a winner of Sports Programing South East Europe Championship