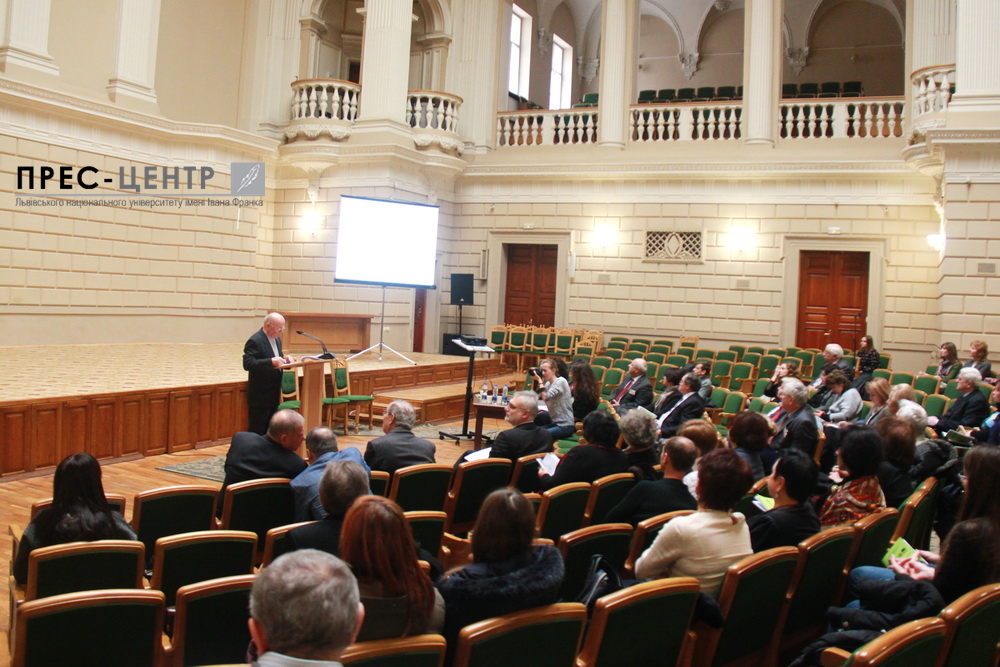 More than 60 scientists from Ukraine, Poland, Lithuania, Austria and the United States are participating in the three-day international scientific conference “Actual problems of modern biochemistry”, dedicated to the 100th anniversary of the birth of Professor Boris Sukhomlynov that began November 17, 2016 in the Assembly Hall of the Ivan Franko National University of Lviv.

“We are proud of the fact that present forum brought together not only Ukrainian, but also foreign leading experts in the field of biochemistry,” – said in his welcoming speech, Roman Hladyshevskyi, doctor of Chemistry, professor, corresponding member of NAS of Ukraine, vice-rector.

The Rector highlighted that the theme of the conference concerns the issues including the key strategic areas of the modern world, namely medicine, food and biotechnology, the use of modern methods and approaches, openness to new ideas, critical assessment of popular trends efficient for integration of Ukraine in the international scientific community. And the very conference, according to Roman Hladyshevskyi, will be an important step in this direction. “Recently, there will be embedded platform not only to outline the major problems of modern biochemistry, but also to combine them effectively to find ways of overcoming them” – summed up the vice-rector.

“Borys Sukhomlynov made a significant contribution to the development of structural and metabolic theory of ionizing radiation; established research priority of the primary structure of hemoprotein animals under conditions of various pathologies and others. In addition, Borys Sukhomlynov is the founder of scientific school “Biochemistry and Molecular Biology”, – said Deputy Rector Roman Hladyshevskyi, adding that Professor Sukhomynov trained 49 Ph.D., and his scientific legacy includes more than 350 scientific papers, 56 of which the scientist wrote working at Lviv University.

Dean of the Faculty of Biological Ihor Khamar sent a welcoming speech to the participants of the International Conference. Ihor Khamar shared his memories of Borys Sukhomlynov, noting that he restored the status of biochemical School at Lviv University and launched the trend of molecular biology.

Speaking about the personality of Professor, Ihor Khamar said: “He is mentioned to be a good organizer, a scientist, but also a man who had a peculiar sense of humor.”