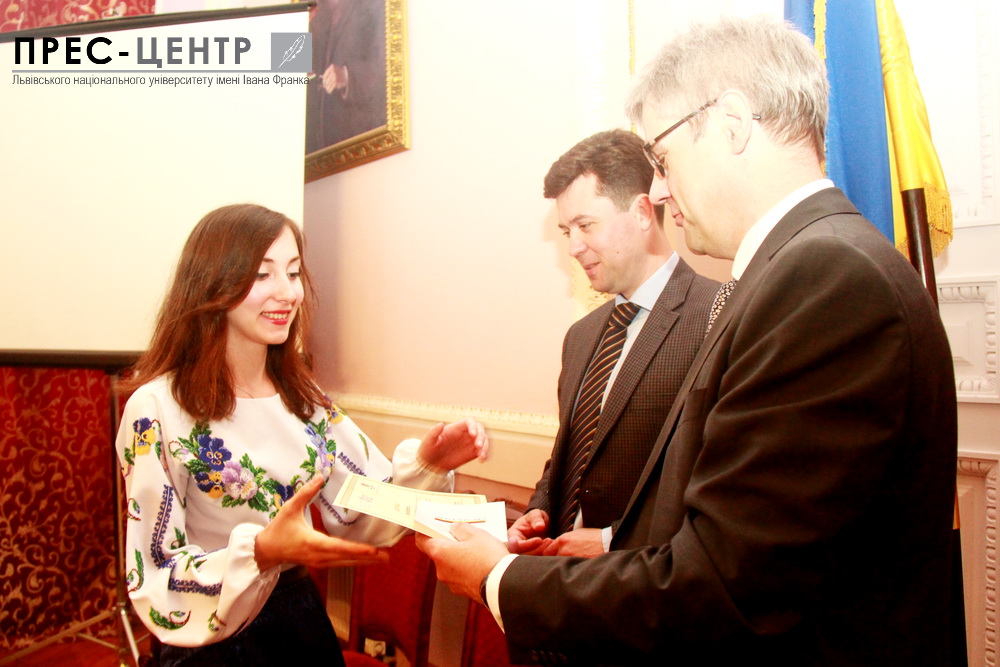 With the assistance of the German Foundation for International Legal Cooperation, the School of German Law has been operating at the Law Faculty of the Ivan Franko National University of Lviv for six years. This year, approximately 100 students took part in it. Only seven of them successfully passed the exam and were awarded international certificates of experts in German law. The school closing and awarding ceremony was held on 23 May 2016 in the University’s Mirror Hall.

“We always strive to improve cooperation between Germany and Ukraine and to build bridges between different areas of our activities. Hence, we want the legal bridge between our countries to become more solid so that we could go over it with confidence,” Dr. Stefan Hülshörster outlined the legal direction of cooperation between Ukraine and Germany in such a metaphorical way.

Dr. Stefan Hülshörster also pointed out that graduates of the German Law Course have considerable potential in the field of international law since “it is important, as never before, to be aware of the law of other states in the era of globalization.”

“During the course, eight docents delivered 64 lectures. We gave you the basics of German law and aroused interest for further studies and research in this field. Thus, the certificate you will obtain should be your impetus and professional chance to become the best specialists in international law, particularly in German law,” said Dr. Stefan Hülshörster.

Maryan Lozynskyi, Vice-Rector for Research, Teaching, Social Issues and Development, congratulated the German Law Course graduates. He pointed out that studying German law at the Lviv University will continue to develop rapidly as “this area is of international importance”.

“Due to such courses, besides law, students have the opportunity to learn the history, culture and customs of the country, thus becoming part of the European community,” said the Vice-Rector.

Volodymyr Burdin, Dean of the Law Faculty, professor at the Department of Criminal Law and  Criminology, also expressed congratulations to the graduates of the Course.

“Obtaining the certificate of the School of German Law is a significant event for each attendee of the Course. Today, seven graduates have set an example of European integration of Ukraine. They are gold reserves in the treasury of our country’s future,” the Dean took pride in the success of the students.

Mr. Burdin also said that “the School of German Law is not only a worldview programme, but a full-fledged educational and scientific start-up for professional development of lawyers and their further training in Germany.”

The German Law Course graduates were also congratulated by judges. Petro Stetsiuk, judge of the Constitutional Court of Ukraine, stated that “awarding the German Law Course certificates has become a long-standing tradition at the modern Lviv University. It is an indication of civilization and an element of European integration,” said Mr. Stetsiuk.

Viktor Shyshkin, a former judge of the Constitutional Court of Ukraine, congratulated the students and stressed the importance of such courses: “Any lawyer should know the law of EU countries. These days, foreign language skills and professional knowledge is the first and perhaps the most important stage of the country’s integration process.”

The German Law Centre at the Law Faculty of the Lviv University was established in 2010 in cooperation with the German Foundation for International Legal Cooperation. In the 2nd term of the 2010-2011 academic year, students of the Law and International Relations Faculties started to study German law. Lectures are delivered by professors from leading universities in Germany who teach different fields of German law.

In their free time attendees have the opportunity to communicate with German teachers, discuss the most interesting professional topics, tell about the Lviv University, its history, academic traditions and show around the city. It helps to bridge the gap between Ukrainian and German education, integrate students into European education standards, acquire special legal knowledge and language practice.