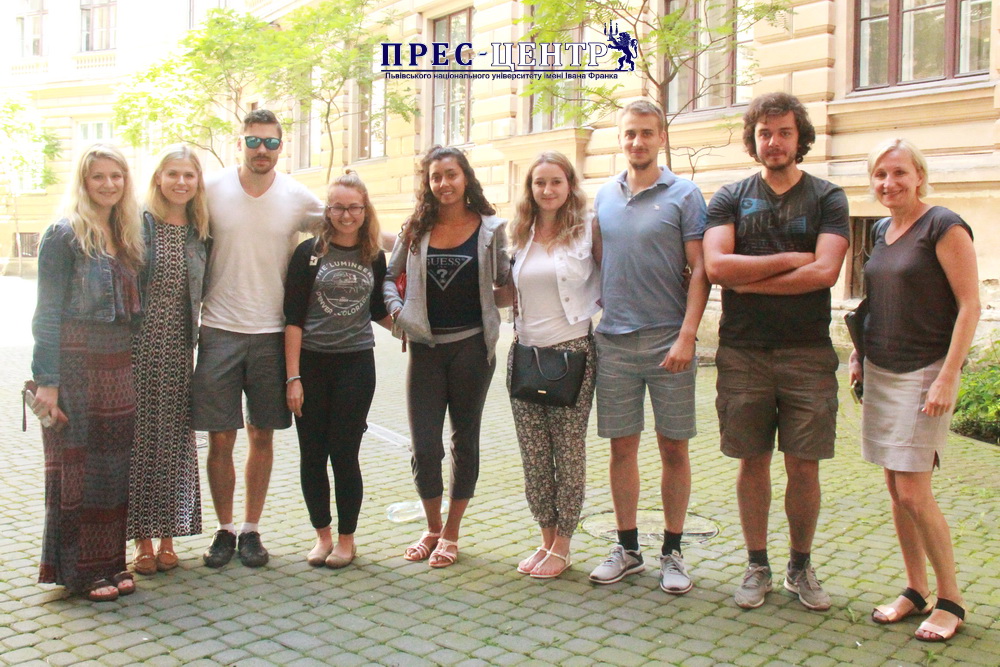 After a few years break summer language school for students from Kansas (USA) and Alberta (Canada) started at the Faculty of Philology of Ivan Franko National University of Lviv on June 6, 2017.

The school was resumed due to successful negotiations between the Vice-Rector for Research, Teaching and International Cooperation Mariya Zubrytska and representatives of Kansas and Alberta Universities and also thanks to an active advertizing campaign of foreign colleagues.

And opportunity to learn Ukrainian language and the culture was used by three US and nine Canadian students who were divided into three groups depending on the initial level of the Ukrainian language. In addition to language courses, the participants of the Program can attend lectures on economic, historical and cultural features of life in Ukraine.

The students enjoy learning in the Summer School and the stay in Lviv. They point out that they are interested in the Ukrainian language and culture for both professional and personal reasons.

A student from Kansas Filene Jacobson says that Ukrainian is one of her favorite languages and is important for learning Eastern Europe. “The Ukrainian language is very important for Eastern Europe. The best way to learn a language is to go directly to the language environment and I am glad that I have this opportunity”, adds Filene, noting that five-hour daily classes bring results.

Filene’s fellow student, Patrick Sevadzh, who studies international relations, visited Eastern Europe for the first time. According to him, the Ukrainian language and culture knowledge is extremely important for his professional development. “I always wanted to visit Ukraine to see how people live, how they communicate with each other. Already after the first week of stay I start to feel intuitively what is Ukraine and Eastern Europe. This I like very much and it will definitely help me professionally”, said Patrick.

Another student from the USA, Franklin Konard notes that he crossed the boundaries of this country for the first time, but read very much about Ukraine before and has the impression that over the last three years there have been numerous transformations in the country. “I like the Ukraine and am pleased it is changing very dynamically”, said Franklin.

A student from Edmonton, Andriy Pryshlyak, like most of his Canadian colleagues already speaks Ukrainian, but notes that he has arrived in the city in order to improve his language level and to learn more about Ukrainian culture. “Lviv is a beautiful city and I adore it. I am interested in the variety of cultures represented here and the history of this city. While studying I come to know a lot of interesting and new about Lviv and Ukraine”, says Andriy, adding that he last visited Ukraine seven years ago and says that now it looks much more modern.

A student from University of Alberta Sasha Omelchenko says that the Ukrainian life, culture and language have always fascinated her. Hence, she plans to improve her level of Ukrainian in the future.

Sasha’s colleague, Anna Bodnar has studied Ukrainian at school and University, but in Ukraine she plans to consolidate the acquired knowledge into practice. “I really enjoy being in Lviv, communicate with local people, stay in a Ukrainian environment. The rhythm of life in Lviv is much calmer than in Canada”, says Anna.

Nataliya Hoym was induced to come to the city dreaming to teach Ukrainian language in school in Canada. In Lviv University she is planning to improve communication skills and grammar. “Lviv is very close to my heart, because my dad was born here and I like the local culture and people”, she said.

“In Edmonton, we are taught to keep our language and culture and I try to do it. At the University, we learn a lot about the language; we learn new words, get familiar with the history and culture of Ukraine. I like it and I want to learn more”, says Stephaniya Kostyuk, who has come to Lviv for the fifth time.

Another member of the School, Markiyan Oliferchuk was born in Lviv, but as a child he moved to Canada. Now Markiyan returned to his hometown in order to better understand Ukraine and not to forget his ancestors. “Lviv is a beautiful city, and unlike my colleagues, I believe that the pace of life here is much more active than it used to be. Here in Canada, all is quiet, everyone goes somewhere by car, and there are many people in the streets. I like being in Lviv, and I’d like to live here”, said Markiyan adding that in the future he does not exclude to return and live and work in Lviv.

Oleg Pikh also left Lviv when he was 8 years old. Since then he visited Ukraine many times and always feels the delight of the city. Oleg also notes that he can later return to Ukraine forever because, according to him, it is very lively and interesting here.

As part of the Summer School tours around Lviv are scheduled including Lviv castles, a trip to the Carpathians and visiting Kyiv, but some members are already traveling alone. For example, Diana Mushynska from Podillya, who lives in Canada for 7, visited her grandmother in Ternopil region. Diana emphasizes the beauty and special atmosphere of Lviv and Ukraine.

The coordinators of the Project, teachers of Ukrainian language and lecturers help create this unique atmosphere of intellectual and spiritual knowledge of Ukraine.

Summer school will run until June, 30 for Alberta students and until July, 22 for participants from Kansas.