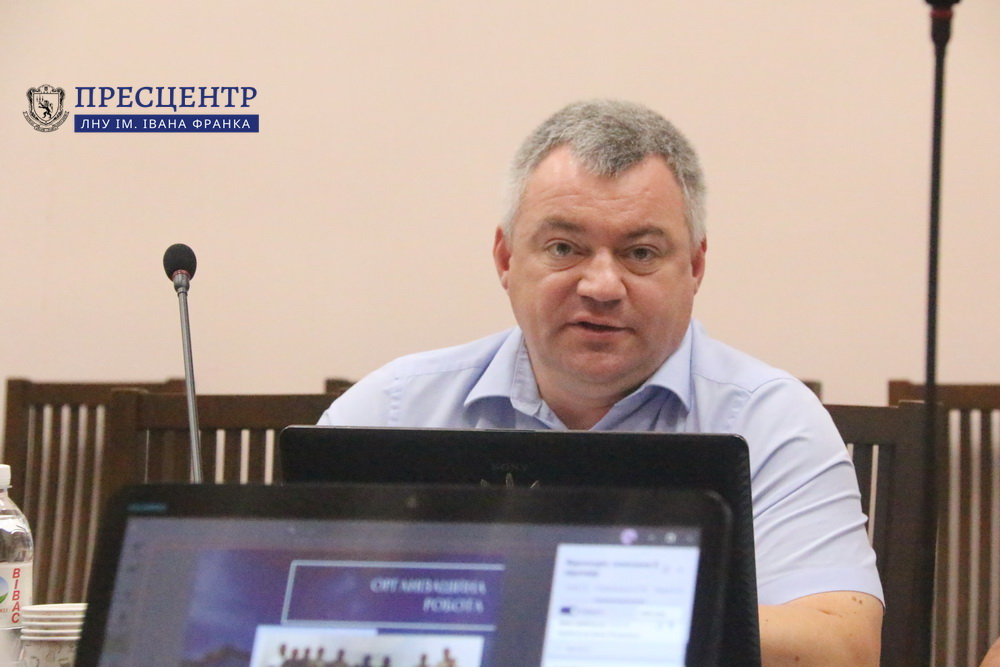 The 21st election meeting of the Primary Trade Union of the Ivan Franko National University of Lviv was held on September, 10, 2020. Taking into account the quarantine restrictions due to the spread of the COVID-19 disease, the conference was held online via the teamwork platform “Microsoft Teams”. 192 participants signed up for the conference. Oleksiy Sukhyi, the head of the department of contemporary history of Ukraine named after Mykhailo Hrushevskyi was the chairman of the conference.

Julian Bek, the acting head of the Primary Trade Union of the Ivan Franko National University of Lviv Julian Bek has delivered the report for the period from March, 24, 2015 till July, 1, 2020. Yulian Bohuslavovych presented detailed information on the financial activity of the trade union, social and legal security of the employees, sport and health, cultural and informational activity of the trade union. Yulian Bek mentioned that two 2 collective agreements have been compiled and signed during the reporting period, also additions and amendments to the collective agreement have been approved during the conference of the Labour Community of the University for three times. The trade union has supported all the events targeted at the social and legal protection, showing their support for all the campaigns of the Federation of the Trade Unions of Ukraine, the Central Committee of the Trade Union of Education and Science Workers of Ukraine, the Lviv Regional organization of the Trade Union of Education and Science Workers of Ukraine, the Trade Union Association of Lviv, namely by calling for the retention of science in Ukraine, protesting against high utility fees, the reduction of rights and guarantees of the workers in the sphere of education and cutting the education funding, etc.

Yulian Bek claimed that during the reporting period more than 200 letters and appeals have been sent to the President, the Verkhovna Rada and the Ministry of education and science of Ukraine, the relevant Committees of the Verkhovna Rada of Ukraine and the trade union has provided the university employees with more than 3000 pieces of legal consultation and legal clarification according to the current legislation.

According to the report, the total sum of funds paid out to the members comprises more than 4 mln UAH, the biggest of which has gone to the financial assistance – 1 820 304 UAH which equals 44.43% and financial assistance for medical treatment – 789 453 UAH, which equals 19,27%. The rehabilitation expenses of the trade union members during the reporting period comprise 826 898 UAH, and the ones spent on the cultural and social events – 824 150 UAH.

Yulian Bek in his report highlighted the activity of the trade union Committee during the quarantine period and stressed that the trade union financially supported the medical establishments that treat patients with the COVID-19 disease, paid out the money to the employees at risk (over 100 000 UAH), joined the purchase of the antiseptics for different university branches, provided the informational and legal support of the employees during the quarantine.

Professor Volodymyr Melnyk the University Chancellor, a corresponding member of the National Academy of Sciences of Ukraine also participated in the discussion of the report. He summarized the results of the fruitful collaboration between the chancellor and the trade union of the Lviv University. Volodymyr Kachmar, the vice-chancellor on scientific and pedagogical activity, social issues and development who used to be the head of the trade union by 2019 also joined the discussion expressing his gratitude for their activity and a qualitative level of development. Andrii Stasyshyn, the dean of the faculty of financial and business administration also participated in the conference.

The dean of the economic faculty, Rostyslav Mykhailyshyn, the dean of the geographic faculty Volodymyr Bilaniuk, the dean of the faculty of arts and culture Roman Krokhmalnyi also supported the candidacy of Yulian Bek. According to the results of the open online voting with 172 participants, Yulian Bek was elected the head of the Primary Trade union of the Ivan Franko National University of Lviv for the period of 5 years. In addition to that, according to the agenda, Maria Kohut and Yulia Hrytsenko were elected the deputies of the head of the trade union and 43 people were elected into the trade union committee.