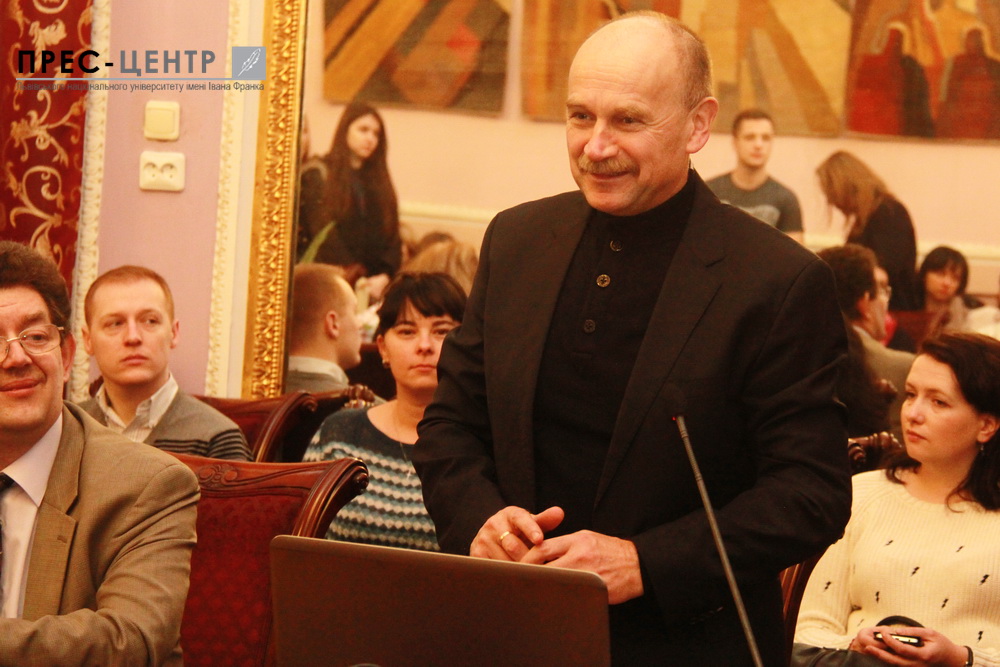 During his visit to Lviv a well-known Polish politician Zygmunt Berdychowski visited Ivan Franko National University of Lviv where he met with the Rector, Professor Volodymyr Melnyk and the students and lecturers of the Faculty of International Relations.

“Today a prominent Polish, a good friend of Ukraine, the Head of the Programme Council of the Economic Forum, a creator of Polish Davos Zygmunt Berdychowski visited Ivan Franko National University of Lviv” – the Dean of the Faculty of International Relations, Ambassador Extraordinary and Plenipotentiary of Ukraine Markiyan Malskyi presented the guest.

As an experienced climber Zygmunt Berdychowski shared his impressions of conquering seven peaks of the world with the students and lecturers of the university. He climbed Denali (McKinley) – the highest mountain peak of Alaska (North America), Mount Everest – the highest peak of the Earth located in the Himalayas on the border of China and Nepal, Carstensz Pyramid – the highest mountain of New Guinea island located in Oceania.

Zygmunt Berdychowski admitted that he was going to conquer the sixth highest peak of the world – Cho Oyu mountain located in the Himalayas. ‘It is located 20 kilometers west of Qomolangma on the border of China and Nepal”, – he noted.

According to the guest, the conquering of the highest peaks of the world requires remarkable endurance and thorough training. To confirm his words Zygmunt Berdychowski showed some videotapes about the most interesting moments of his own climbing experience to the students and lecturers of the university.

During the meeting the students had the possibility to discuss a number of topical issues connected with foreign relations of Ukraine with the EU countries with the Polish politician.

Expanding cooperation between Lviv and Charles Universities
The new specialty “Central Europe throughout history: from multinational monarchies to Visegrad cooperation” will be introduced at the University”