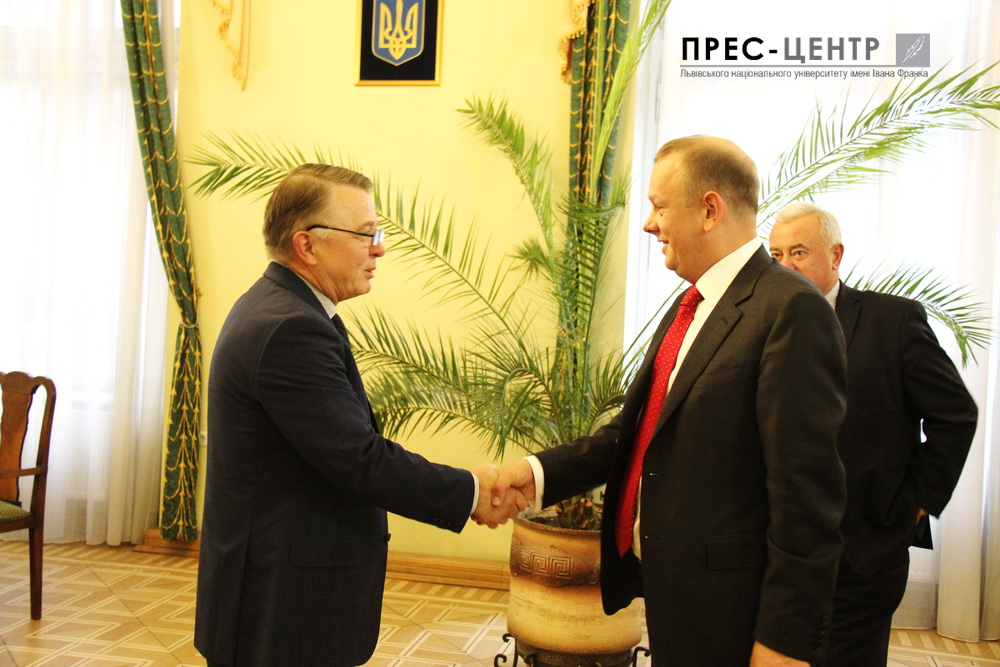 During his visit to Lviv, on 4 October 2016 Ambassador Extraordinary and Plenipotentiary of the Republic of Estonia Gert Antsu visited the Ivan Franko National University of Lviv, where he met with the Rector, professor Volodymyr Melnyk.

The meeting was also attended by Vice-Rector for Research, Teaching and International Cooperation Mariya Zubrytska and the Dean of the Faculty of International Relations, Ambassador Extraordinary and Plenipotentiary Markiyan Malskyy.

The Rector spoke about international relations of Lviv University with educational and scientific institutions all over the world stressing the necessity to strengthen Ukrainian-Estonian cooperation.

“I am convinced that the University of Tartu and Lviv University will deepen their cooperation, implement academic exchange programmes since young people are the strongest element in building bridges of understanding between states,” pointed out the Estonian diplomat.

Vice-Rector Mariya Zubrytska stressed that the Ivan Franko University of Lviv is the only university in Ukraine teaching the Estonian language. “Our students have the opportunity to communicate directly with a native speaker – a lecturer from Estonia,” added the Dean of the Faculty of International Relations Markiyan Malskyy.

The Ambassador Extraordinary and Plenipotentiary stated that the government of the Republic of Estonia intends to continue supporting educational projects initiated by Ukraine.

“Although it is the first time I have visited Lviv and the Ivan Franko National University of Lviv since I have recently started my diplomatic mission to Ukraine, I can already say with certainty that I am impressed by an active position and civic awareness of the students of Lviv University,” commented the Estonian diplomat.