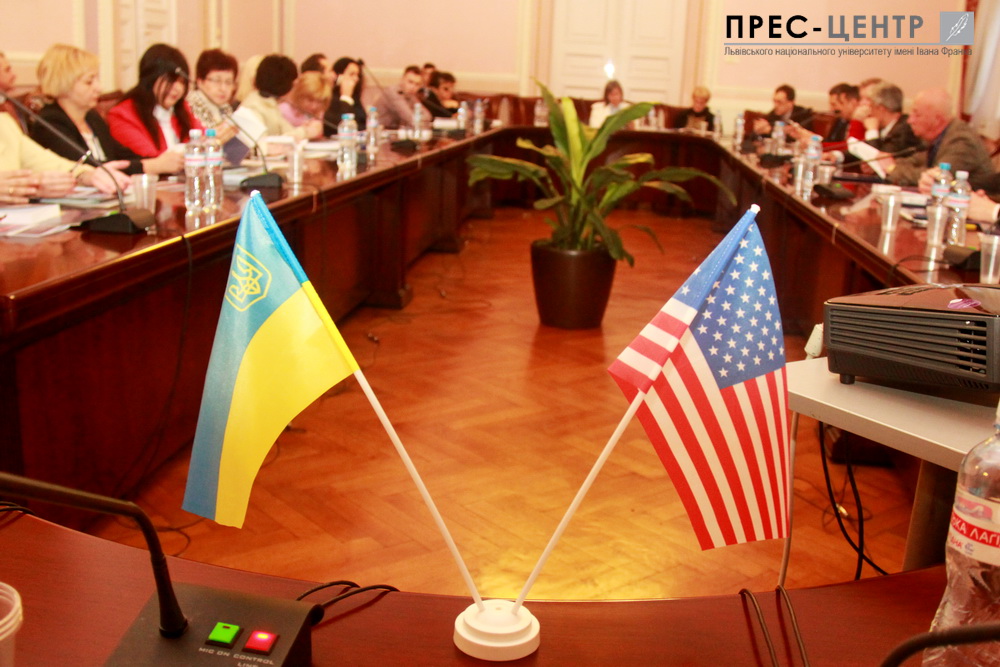 At the initiative of the Center for American Studies of the Faculty of International Relations of Ivan Franko National University in Lviv in cooperation with the Kennan Institute at the Woodrow Wilson International Center for Scholars (USA) and Ukrainian Foreign Policy Association, on April 12-13, 2016 the third multidisciplinary conference of American Studies “A quarter-century Ukrainian-American friendship: the worthy future experience”, dedicated to the 25th anniversary of the US recognition of the independence of Ukraine has been held at the University.

Conference moderator and chairman of the Organizing Committee, Director of the Center for American Studies at Ivan Franko National University in Lviv, the Fullbright program graduate – Kennan Roman Kalytchak considered the conference to be a good opportunity to overthink the prospects of Ukrainian-American relations. He also expressed hope that there would be fruitful discussions during the interdisciplinary conference in line with constructive dialogue in friendly and positive atmosphere. He specifically thanked the Kennan Institute in Washington for their support of the conference.

On behalf of the University administration, the vice-rector for scientific and pedagogical work and international cooperation – Mariya Zubrytska congratulated participants representing educational and research programs, as well as research centers for American studies on the start of the conference. Mariya said that despite difficult period that Ukraine is currently facing, they would manage to focus on the positive experience of our country with other countries. The vice-rector added: “And the very research development is a sign of fruitful cooperation in the future”.

The dean of the Faculty of International Relations at Ivan Franko National University in Lviv, professor Markiyan Malskyi focused on the importance of the strategic partnership between the United States and Ukraine. “What is urgently needed in Ukraine is a balanced, clear, unbiased and scientific analysis of what is happening with our relations”. He also stressed that the results of scientific research is a powerful resource that should be used for Ukraine to become a prosperous and successful country. “The participation of American scholars at the conference, held at Ivan Franko National University in Lviv, is a clear manifestation of the established partnership “, – said Markian Malskyi. In his summary, the speaker asserted that young Ukrainian scholars and students compose an important part in programs jointly implemented by American and European scientific and educational centers, as the gained experience and knowledge will help to defend Ukraine’s interests at the international level.

Deputy director of Kennan Institute and director of the Rule of Law Program at the Woodrow Wilson Center, William Pomerantz said that Kennan Institute is always ready to support the initiative and help to implement projects that promote dialogue and understanding between Ukraine and the United States.

Director of Kyiv office of Kennan Institute – Кateryna Smahliy read out a congratulatory telegram on behalf of director of Fulbright Program in Ukraine Martha Kolomyyets and presented the results of the previous conferences. She also said that the Kennan Institute develops its alumni network for creating the enhanced cooperation with the US.

Volodymyr Khandohiy, former First Deputy of the Foreign Minister of Ukraine, and current President of the Ukrainian Foreign Policy Association, introduced the organization he represents. In particular, the speaker noted that this conference – is “not a ritual tribute, but the possibility to understand the history of relations between the countries, to analyze cooperation between the US and Ukraine, as well as to outline future prospects.”

Plenary session has been in form of discussion on “Prospects of Ukrainian-American relations”. I. Mechnikov Odessa National University scholar, a Fulbright-Kennan graduate  – Volodymyr Dubovyk, delievered a speech on “The USA and the Ukrainian crisis”. Further work of the multidisciplinary conference of American Studies “A quarter-century Ukrainian-American friendship: the worthy future experience” was to be continued in five thematic sections.

Significant attention and interest were attracted to legal, ethical, economic and humanitarian issues, including security issue in course of the armed conflict and the US role in its settlement; democratic imperatives of America’s international political development; experience in countering and combating corruption; respect for the rule of law and civil liability; the problem of global crisis and overcoming of its consequences, small and medium enterprises development, attracting international investments by Ukraine and others.

The participants could not but cover linguistic and literary issues, and the reports on  mass media and experience sharing with Ukraine in context of publishing have been presented.

The conference program also provides presentation of books and publications supported by the Kennan Institute and the Fulbright Program.