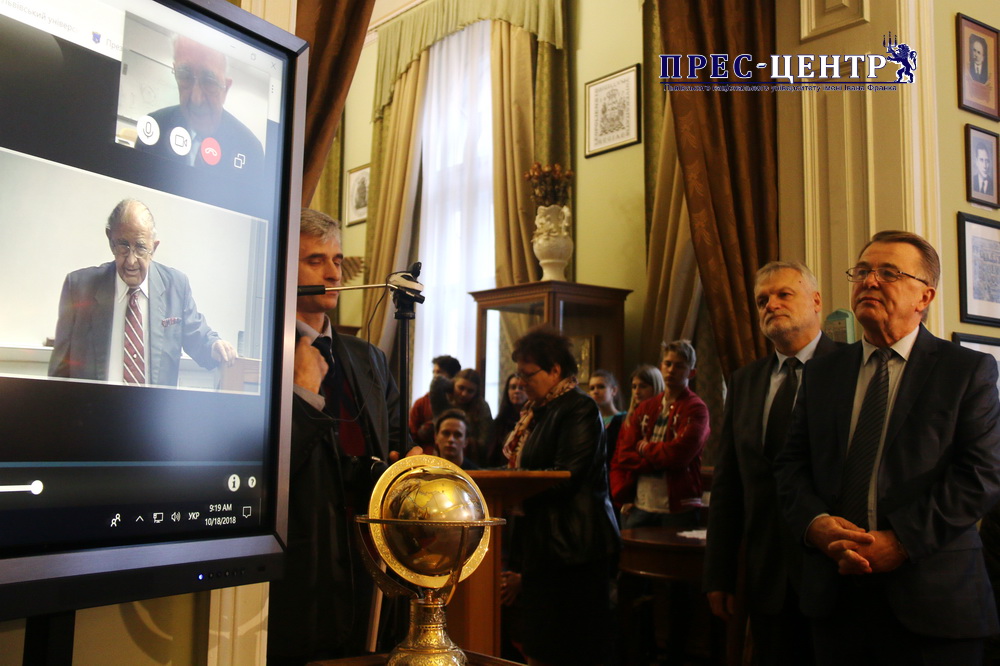 On the 18th of October at the Museum of the History of Lviv University, a virtual video meeting was held with Liubomyr Romankiv – one of the creators of IVM Corporation (USA). During this video talk, a prominent researcher was announced to be honored with Doctor Honoris Causa of Lviv University for the creative contribution to science, establishing a positive image of Ukraine and active scientific and educational cooperation with the Ivan Franko University.
Rector of the University, Corresponding Member of the National Academy of Sciences of Ukraine, Volodymyr Melnyk addressed the audience with a welcome speech. He admitted that Liubomyr Romankiv is an eminent scientist, whose fundamental discoveries influenced modern society’s understanding of the principles of the universe.
“The extent of his research is far beyond the framework of applied science. This is the world’s man which aspires to scientific excellence, the person who has not only changed the idea about possible ways of information transmitting but has crucially changed the life of each of us”.

Professor Roman Hladyshevskyi, Vice-Rector for Science, Corresponding Member, added that over the past decades, the society has become extremely informative: computer technologies are developing, and a large amount of data is being accumulated, so there is a need to systematize and preserve it all. “We need to share our accumulated knowledge. All this seems abstract, but there are real materials, which are being studied by Dr. Romankov. This is an example of how to transfer from basic science to applied, and then to practical applications “, – remarked Roman Hladyshevskyi.

Liubomyr Romankiv started a conversation with warm words about Ukraine, admitting that it has always been the dearest country for him in the world: “Ukrainians are very skillful, inventive, persistent. Not every nation has such talents. They can find solutions for any problem. Probably it is the way of thinking that was carved through centuries of numerous challenges”.

During the teleconference, Liubomyr Romankiv tried to elaborate on what the participants of the meeting were interested in, devoting considerable attention to the issues of patenting and protecting the results of scientific research. “If you work in a company that is interested in your invention, then you provide all the data and describe the process and the result of the study. Then the lawyers of this company are engaged in the legal registration of the patent. Ultimately, the firm provides a patent in your name, but it remains its property. You can also make a patent yourself. In this case, two identical letters should be written with all the data of the study and the dates. One is to send a lawyer, save another one. This will be a confirmation of your championship in the study. Such a service will cost from 5 to 20 thousand dollars – everything depends on the complexity of the opening, “- said the scientist.

The Honorary Doctor advised young scientists who want to patent and popularize their research: “At the very first, you should evaluate the importance of the invention, where and how it will be sought, or extends to only a certain area or covers all spheres of life. Subsequently, we need to find a sponsor who will pay for part of the research but will have a share of future profits accordingly. It is also very important to find the opportunity to patent their inventions in different countries”.

Liubomyr Romankiv explained the principle of managing the study process. He noted that the important links are as ordinary employees who know the details of all the possibilities of a particular invention and will be able to communicate directly with customers or users, as well as managers or lawyers. Because they understand where and how to look for the relevant audience, have certain connections, they can evaluate the prospects of applying a specific study in other countries.

In addition, Liubomyr Romankiv shared his thoughts on the prospects of chemistry as a science. “The future should be considered through the possibilities of chemistry. Chemistry of a solid is so elaborate that the possibilities in it are quite small. And the chemistry of the soft body, that is, biochemistry still awaits the discovery. It should be understood that everything living on Earth is born here and inextricably linked with our planet. This is the most important point for understanding how the human brain works, on what grounds is the human body functioning. Understanding all these details, we will be able to develop new therapeutic systems for the body. Therefore, this is one of the most important areas of research that should be developed, “said the Honorary Doctor.

Liubomyr Romankiv also spoke about the main directions that the IVM company is working on: “The first is the acceleration of the work of computers. This is one of the most important areas of science. Next, the study of intellectual or artificial memory, that is the memory, which can develop itself and save a large amount of information. And another major study of IVM is the preservation of information in a large number, in particular in the special “clouds”.

During his communication with the academic community of Lviv University, Liubomyr Romankiv also mentioned his emigration to Canada, his separation from his family, his studies and life abroad. He noted that such moments would remain forever in his memory. Also, the scientist told about the intention to write a book on his own research, since during the work of the IBM IV the inventor could not publish his works so that other corporations did not intercept his discovery.

Let’s also add that Lyubomyr Romankov expressed his sincere appreciation for the decision of the Academic Council of the University to award him the title of Honorary Doctor of the Lviv National University. Ivan Franko, noting that Lviv will always be a special city for him.